Today’s Seattle PI editorial comment on Iran is on point regarding the increasing drum beat regarding Iran. As it points out, on Sunday Face the Nation Sen. Lindsey Graham called Iran "The cancer of the Mideast" and Republican hopeful Sen. John McCain, has repeatedly blurred the lines between al-Qaida in Iraq with Iran. We forget the history of America’s role in that region. As the comment notes, we orchestrated the 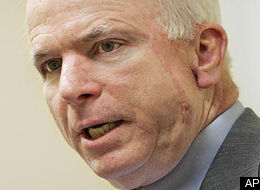 coup in Iran overthrowing an elected leader and re-installed the shah which gave the U.S. (and Britain who conspired with the US) access to Iranian oil. We sold weapons to both Iran and Iraq during their fighting.

McCain On Iraq: "We’re Succeeding. I Don’t Care What Anybody Says"

The Huffington Post also has a relevant comment about the issue. The Post noted that at a stop in Jordan, last week, McCain claimed al-Qaeda insurgents were being trained in Syria. He insisted that it was "common knowledge and has been reported in the media that al-Qaeda is going back into Iran and receiving training." His good buddy, Sen. Joe Lieberman leaned forward to whisper in his ear and McCain said "I’m sorry, the Iranians are training extremists, not al-Qaeda" which shows you what an expert the Senator is on this subject.

As Huffington notes, the last time he was in Iraq he strolled through a Bagdad market declaring that was proof he could "walk freely" around Bagdad. He omitted saying he was being guarded by three Blackhawk helicopters, two Apache gunships and 100 armed soldiers.

The U.S. death toll is hitting 4000 (with 25 American soldiers killed over the last two weeks). Another 57 people killed in Iraq this week. We still don’t have any exit plan for years to come — all for a bill that is accumulating at the rate of $12.5 Billion a month which is almost $5,000 every second! The good Senator insists that leaving Iraq is not a U.S. option and has talked about occupying the country for a hundred years. Dick Cheney, who took five consecutive draft deferments to stay out of the Vietnam War, and the Senator are in agreement. Neither minds keeping the U.S. in the Iraqi quagmire for an indefinite period of time while the country his rushing towards economic recession.

2 thoughts on “SEN. JOHN McCAIN, NOT CONTENT WITH IRAQ FIGHTING RATTLES THE SWORD ABOUT IRAN”