We have just returned from a fishing trip to British Columbia, Canada. We stayed at the king Pacific Lodge which is floating hotel. It is, in fact, described as a luxury wilderness hotel on their website. The hotel is moored at Princess Royal Island and is a Rosewood resort hotel. Accessible only by float plane, 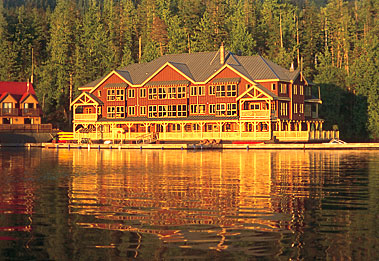 the hotel is located within an area called The Great Bear Rainforest. It is about 56 miles South of Prince Rupert and close to Ketchikan, Alaska inside Bernard Harbor. The hotel is three stories high but has only seventeen rooms.

There are many activities for the guests including fishing, whale watching, hiking and kayacking.�A helicopter is available to fly guests to remote hiking areas or fresh water fly fishing. Experienced fishing guides are provided for salt water fishing. Our interest is fly fishing and we spent the three days we were there salt water and river fishing. Coho salmon were plentiful and we caught a large number on flies. The first morning we caught nine salmon and fishing was good the entire time we were there. We kept two Coho and released all the rest. The fish are bright and fun to catch. On Sunday we flew by helicopter into a river area and fly fished there for Cutthroat trout. Fishing there was slow, but the bugs were not. My wader had a hole in it so my right boot was full of water, but the scenery was impressive.

The food was excellent. There were interesting guests at the lodge including a couple from Germany, a physician husband and wife from France as well as guests from New York and Florida. Michael Uehara, president of the lodge organization, whom Lita and I have known for several years was there as well. We enjoyed the people and the Eagles who wait in a nearby tree for fish to catch.�The weather was overcast the first day, but became sunny and warm. �

One day we were fly fishing for sea bass, when a pod of five humpback whales showed up to feed on the herring. They make circles around the herring with bubbles in the water which ball the fish up. Then they move from the bottom up to the surface through the fish feeding as they go. Large water spouts from their blow hole, followed by a back and then a tail as they sound again. What surprised me was the noise they made while feeding. It sounded like animals in the jungle. A loud kind of roar and other chattering noises. You could smell the herring from their release of water at the surface.

The airlines that flies people to the lodge had a plane like the one we flew in on, hit a mountain on

Vancouver island killing five people including the pilot. This happened the day before we were to fly out on the same type of plane for the same charter airlines. The planes are Grumman Goose amphibious air craft. They are very reliable but some of the passengers were nervous flying home to Vancouver. We spent the night at the Fairmont Hotel located right at the airport on our return trip.

Coming back to reality is difficult. We return to Vancouver by float plane on Thursday for the Washington State Trial Lawyers Convention so it's hard to complain about work.