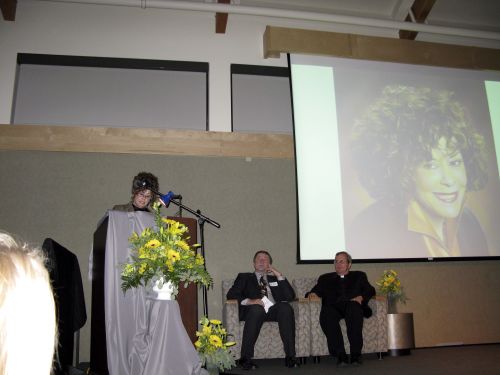 beautiful and talented wife, Lita Barnett Luvera, along with orthopedic physician John W. Staeheli, Boeing executive William Geary, and developer Michael A. Tucci received awards. My unbiased opinion is, of course, that Lita gave the best acceptance speech and was most deserving of her honor. Various photographs from the lives of the recipients were shown 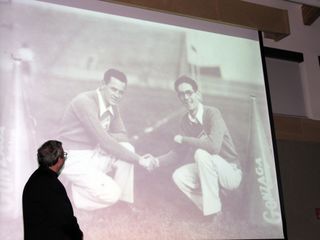 on a screen as the reasons for giving the award were related to the audience. This included a picture of Lita's dad when he was a Gonzaga cheer leader and photos of Lita as well. I was particularly pleased that her brother Hollis Barnett and his wife Patty were present along with our lovely granddaughter Alison Kairis. Hollis

and Patty are both graduate of Gonzaga Law School. Like Lita and me, they have practiced law together for over thirty years. Alison is a freshman at Gonzaga this year. We were also very much honored to have our long time friend Fr. Frank Costello S.J. and the dean of the Gonzaga Law School, Earl Martin, at our table. Fr. Costello flew with us to Italy to officiate at the renewal of our 20th wedding anniversary near Positano, Italy.

Various photographs from the lives of the recipients were shown on a screen as the reasons for giving the award were related to the audience. Each

person receiving the award then gave a short address to the 200 plus people who were present.

A graduate of Gonzaga Law School in 1977, Lita was raised at the entrance to Mt Rainier National Park where her parents owned

and operated The Gateway Inn, a family run resort. She and her brother Hollis as well as her sisters Barbara and Monica all worked in the small family resort.

Lita’s father attended Gonzaga University in the mid 1920's. Male cheer leaders were common at colleges during that period and he was a cheer leader. Her mother was a student at nearby Holy Names Academy. They met at a college dance and fell in love. They were married for over half a century.

In addition to her law work as a partner in the law firm, Lita has been involved in supporting The Forgotten Children’s Fund, 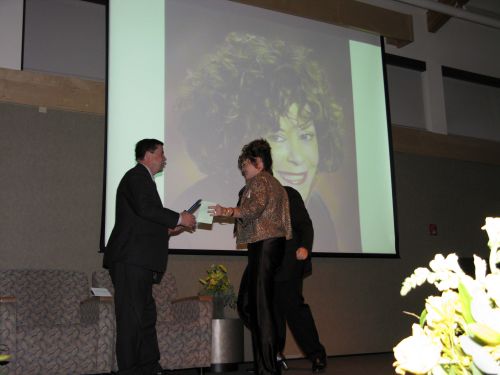 Special Olympics, Children’s Hospital Foundation, the Bailey-Boushay House and the Crystal Judson Family Justice Center. She has volunteered for the Center for Women and Democracy at the University of Washington. She traveled to Cuba, with that group, led by Senator Maria Cantwell. She has served on the Board of Trustees for the Patrons of Northwest Civic, Cultural and Charitable Organizations (PONCHO). She has served as a regent on Gonzaga’s Board of Regents since 2001. Lita and I sponsor the Luvera Lecture Series each fall for the law school which brings national and world leaders to lecture.

In accepting the award, Lita gave credit to her parents and her family along with her Gonzaga Education. It was a very wonderful evening and I am very proud of Lita for receiving this much deserved honor.