The Church of the Holy Sepulcher in Jerusalem has been historically venerated by Christian religions as the site of Christ’s crucifixion, burial and resurrection. It’s located at the end of a street Via Dolorose, the path of sorrows. The Roman emperor Hadrian had erected a temple to Venus in this location. In 326 the mother of Emperor Constantine came to the city looking for sites associated with Christ. She 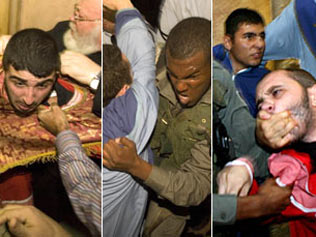 decided this was the site of the resurrection and felt she had found the true cross. When Constantine declared Christianity the official religion of Rome, he ordered the pagan temple destroyed and a church built on the site his mother had decided was the place of the crucifixion and resurrection. The original church structure was partially destroyed and rebuilt more than once over the centuries.

In 1767 the governing authority of the Jerusalem was tired of all the fighting among different Christian religions claiming the right to occupy and administer the church. A decision was made to divide the areas as well as schedules of worship among them. The primary custodians became the Eastern Orthodox, Armenian Apostolic and Roman Catholic churches. In the 19th century the Coptic Orthodox, Ethiopian Orthodox and Syriac Orthodox churches were allowed a lessor role in the responsibility for administration of the structure. Due to the history of violence and conflict among these groups, strict times and places for worship by each was regulated in common areas. This, however, did not stop conflict and even physical violence among the competing sects.

Recent examples of the conflict include a Coptic monk, sitting in a chair on the roof at a spot claimed by that group, who decided to move his chair from the assigned spot to the shade in 2002. The Ethiopians objected and in the fighting that followed, eleven were hospitalized. In 2004 a door to the Franciscan chapel was left open by the Orthodox during celebrations. That caused a fistfight resulting in the arrest of several monks. On Palm Sunday in 2008 a Greek Monk was ejected by a rival group and a brawl broke out. Police had to be called to break it up.

More recently on November 10, 2008 Israeli police had to be called to break up a brawl between Armenian and Greek Orthodox monks. It started when Armenian monks began a procession which the Greeks objected to because it didn’t include one of their monks. After the police broke up the brawl, bloodied monks were handcuffed and hauled away by the police.

The conflict involves even safety improvements. The six Christian sects controlling the ancient church have blocked the Israeli government from adding a fire exit to the structure because they can’t agree on where it should be located. Renovations to the roof are badly needed as engineers say it could collapse. However, the Ethiopian and Coptic sects have delayed the work due to their disagreements about the project. A ladder placed on a ledge over the entrance in the 19th century has remained in the same place because the sects can’t agree on who has authority to take it down.

Several years ago Lita and I were on a cruise that stopped in the holy land for a tour of Christian religious sites. We went to this church and witnessed a loud dispute between two of the religious groups with pushing and shoving. It involved a dispute as to the schedule for a religious procession. We were both disgusted by the whole affair and not very impressed with the rather ostentatious religious structures erected at sites believed to have religious significance.

The petty disputes and fighting that have now gone on in this church for centuries is an embarrassment to Christianity. It seems to me to also be a glimpse into what is wrong with organized Christian religions who have lost their mission of love of God and love of neighbor and who are intolerant of other faiths. Their intolerance and exclusion of people Jesus would have sought out and embraced is a reflection on their having lost their religious mission. As Mahatma Ghandi once said: "I like you Christ. I do not like you Christians. You Christians are so unlike your Christ."