The National Catholic Reporter (http://ncronline3.org/drupal/ on December 12th had an article by Margot Patterson about the Trappist Monks who are rebuilding a Spanish abbey stone by Stone in Vina, California. The unusual part of the story is that it involves the reconstruction of the Cistercian abbey which had been located near

Madrid, Spain at Santa Maria de Ovila and which was purchased by William Randolph Hearst. This abbey was built between 1190 and 1210. The monks carved the stone and built the abbey in Moorish Spain. They occupied the monastery until 1835 when the Spanish government ordered the abbey closed. By the time Hearst discovered the abbey it was in disrepair. He purchased it in 1931 for $90,000 and had it taken apart stone by stone. The stones were carefully numbered and crated so they could be rebuilt like a giant puzzle. To get them to the port for shipping he constructed 33 miles of railroad track. He spent over a million dollars in the process.

He had it shipped to California, where he intended to add it to his estate on the McCloud River, but he ran out of money. The project was not completed and was left in storage. In 1941 he donated the stones to the City of San Francisco with the understanding it would be rebuilt at the Golden Gate Park. 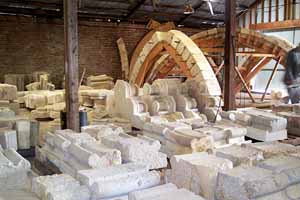 The Abbott of the Cistercian abbey in California learned of the stones and spent some twenty years trying to obtain them for an Abbey. He finally succeeded on the condition construction would begin within ten years.  The problems in doing this are enormous. It took twenty truck loads to move the stones. The 800 year old stones have to be put back in the same way as the original abbey without the benefit of the coding. Modern building codes and costs of construction present a huge obstacle to the project. The jigsaw puzzle also involves using centuries old stone and modern cement yet make it look authentic. Some forty percent of new stones in place of the missing original ones have to be matched. The California building code had to be met and building it for earthquakes presents another problem as well.

The new location has historical significance as well. The abbey is located on 590 acres the monks occupy near the small California town. The property once belonged to Leland Stanford the railroad magnate and once was the biggest vineyard in the world. He planted some 3,800,000 vines on the property. The monks now face the problem of raising the money needed for the project. Out of the money raised so far $1 million was spent to transport and reconstruct the stone puzzle. The monks support themselves with walnuts and plums as well as cultivating grapes.  They need another $1.5 million to complete the project.