I was at Gonzaga a week ago for a class reunion. The Spokane Coeur d’ Alene Living magazine (http://www.spokanecda.com/)had an article by Joe Kamps about James Capone, eldest brother of the notorious Al Capone. In his well written article, Kamps described the life of Chicago’s Al Capone's  eldest brother who spent his life in the West under an assumed name.

Kamps writes that James Vincenzo Capone was born near Naples, Italy in 1892 as the eldest of the seven boys in the family. The family immigrated to Canada, then to Brooklyn. At age sixteen James 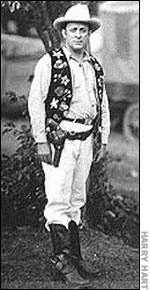 joined a traveling carnival. His travels to the West resulted in an interest in Native American culture as well as six guns and became an expert shot. After wandering around the West he joined the army and served in France during the first world war. After discharge he settled in Nebraska, changed his name to Richard Joseph Hart. One wonders why he decided to change his name, whether it was because of his brother Al or because there was a silent screen cowboy star of that era, William S. Hart.

In Nebraska he married and became the town marshal in the small town where he had located. He was offered a job as the U.S. Indian Service prohibition agent in 1920. His job took him to surrounding states to stop the manufacturer and sale of liquor to Indians. Hart was bright and learned to speak the language of the Native Americans, especially Lakota and Omaha dialects.

A short time after he took the job the Volstead Act was passed introducing prohibition to the United States. Capone, as Hart, was relentless and efficient at his job while his brother was just as relentless in violating the law. Hart's "uniform" was of his own making:  pearl handled guns strapped to his hips. He was  meticulously honest in his job and his reputation outstanding. He was also a crack shot. His skill with a six shooter resulted in his being called "two gun Hart" with newspaper articles reading "Two-gun Hart Gets his Man."

In the meantime, during the 1920's, his brother, Al Capone, was busy at bootlegging, operating  brothels and illegal gambling. He was making millions and using a the money to buy off law enforcement, judges and anyone else who needed buying and the uncooperative were eliminated. At the same time, his brother was so well regarded that he was appointed personal body guard to President Calvin Coolidge while he was in Dakota in 1927 on vacation. During this time the Hart family lived in Coeur d’ Alene and Plummer, Idaho as well as Spokane. However, Hart didn’t spend a lot of time in any one place.

John in Iowa. He then went on to Chicago to see his mother. On his return, the for the first time, he told his wife and children that he was, in fact, Al Capone’s brother. Until then he had claimed he was of Mexican and Native American ancestry. In 1946, he allowed his son Harry to go to Wisconsin with him where he met his uncle Al Capone. However, Al had been released from jail and was suffering mental problems from tertiary syphilis.

Hart moved his family back to Nebraska,to the town where he had been town marshal. He died there of a heart attack at age sixty on October 1,1952.

This was a fascinating fact of history I had not known about how two brothers lived their lives so very differently. I wonder what social scientists would make of this environment vs genetic question.