i've just read Andrew Jackson  by H.W. Brands. Jackson was known for his military and Indian fighting as well as toughness. He was quick to use his cane on someone who defamed him and was in more then one duel. Nicknamed "Old Hickory" he was associated with the American frontier. The seventh president of the United States, Jackson's portrait appears on the twenty dollar bill.

When he became a lawyer and entered practice of law wrote a statement of principles. Two of these were:

He was a circuit traveling judge. During a criminal case where he was acting as the judge, a drunk outside the court room waved a pistol around and was shouting threats to kill the judge, the jury and everyone 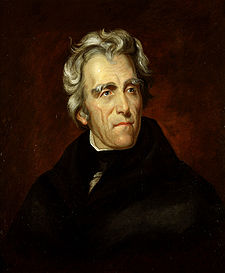 involved in the case. Jackson ordered the sheriff to arrest him, but the sheriff was unable or unwilling to face the man with the pistol. As a crowd grew Jackson declared a recess, took off his judicial robes and with his pistol strode outside, parted the crowd and walked up the drunk. Pointing his pistol he told him to surrender "or I’ll blow you through." Everyone in the crowd fell back, certain there would be a shooting, but instead, after a pause, the drunk meekly handed over his weapon and allowed himself to be led away by the sheriff.

Later the drunk was asked why he surrendered after standing off the sheriff and even a posse who tried to arrest him. The prisoner replied: "Why, when he came up, I looked him in the eye and I saw "shoot". There wasn’t shoot in nary another eye in the crowd. So I says to myself, says I: Hoss it’s about time to sing small and so I did."

Jackson survived military battles, Indian wars, duels, fights and even an assassination attempt. In 1835 Jackson was exiting the capital building when a man stepped out of the crowd at less then ten feet away. He pointed a pistol at the President's chest and fired. The percussion cap exploded but failed to ignite the powder. The gun failed to fire the bullet even though the cap explosion was so loud people thought the pistol had fired. The crowd momentarily froze giving the man a chance to pull out a second pistol which he aimed directly at Jackson and pull the trigger. Again the cap exploded but not the powder so the gun again failed to fire the bullet. By then Jackson reacted and charged the man with his cane. At the same time the crowd reacted, pulling the man down and hauling him away. Jackson was unharmed. In the course of the investigation the police tested the pistols. Each time they tested them both pistols fired perfectly.

John Quincy Adams and Jackson were bitter enemies. Jackson blamed Adams for a mud slinging presidential contest which he believed caused his wife's death. In addition, they had totally opposing 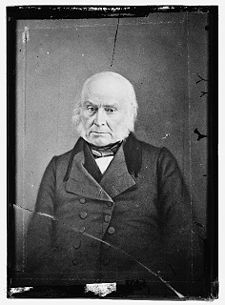 views of what the role of government was in America. Adams believed that ordinary Americans weren’t fit to govern themselves, that left to their ignorance they would choose military hero's and demagogues who told them what they wanted to hear. He saw the election of Jackson as an early sign of the collapse of the republic. Jackson believed just the opposite. He believed the point of a republic was to make government responsible to the people who lived under its laws. Democracy made mistakes, he acknowledged, but mistakes were honest and correctable mistakes of human misjudgment rather then entrenched mistakes of the selfish elite under Adam's type of government.

Jackson had been afflicted his whole life with health problems including a lead ball lodged inside his shoulder area during a battle which remained there for years. On June 8, 1845 he died of heart failure and chronic tuberculosis.

On February 21, 1848 the House of Representatives was debating honoring US Army officers who had served in the Mexican-American War. Adams was opposed. When the house erupted into "ayes" Adams cried out "No" and at that moment he suffered a massive cerebral hemorrhage, falling to the floor. Two days later he died.