Well, another one of those self righteous hypocrites got caught doing what they preached against. South Carolina Republican Governor Mark Sanford has admitted having an affair. This was the poster boy for the Christian right. As state senator John Land said about Sanford's disclosure that he had a mistress even though married with four sons:

Sanford is the man who voted to impeach Bill Clinton over his sexual indiscretions. He fumed about supporting Republican Representative Bob Livingston, House Speaker, after he admitted having extra 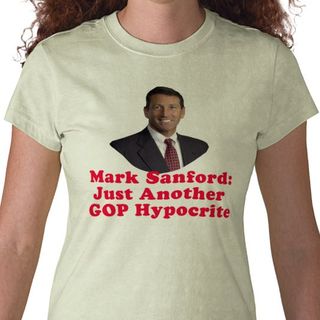 marital affairs. Sanford said at that time "We as a party want to hold ourselves to high standards, period." He also called upon Republican Senator Larry Craig (with the tapping foot) to resign when he was arrested for lewed conduct by an undercover cop in a public restroom. However, Sentator Craig, who was a loud proponent of Christian values, continued to deny he was gay after pleading guilty to a lessor offense.

Sanford' isn't the only politician whose self righteous walls have come crumbling down when their skeltons were no longer in the closet. Recently we had the news about Republican Senator John Ensign who was a member of Pentecostal International Church of the Foursquare Gospel. He opposed gay marriage and gay rights because he said:

Then he was caught and admitted to having had an affair with a member of his staff.

But, the list of hypocrites is a long one. We can start with Republican Senator John McCain who ran for president insisting he was "a pro-life, pro-family" candidate. However, it turns out his first wife was already married to a naval academy classmate when they became involved and then married. Than she was in a serious auto accident while he was held in prison in Vietnam. After his return and discovered her condition he began,by his own admission, a series of affairs ending with an adulterous affair with his present wife Cindy. He then divorced his disabled wife to marry Cindy, but inspite of all of that  had the backing of the religious right during the election.

What about Republican Senator David Vitter of Louisiana? This was the "family value" politician who preached against abortion, for family values, and against sin, gay marriage, and all the other things good family men believe in. However, it developed he had been spending time with prostitutes. Of course, he didn't own up to it until his phone number showed up in the records of a woman who was alleged to have been a D.C. Madam who ran a Washington D.C. prostitution ring.

We also saw Republican Congressman Mark Foley get caught hitting on teenage page boys after promoting the Republican line about being opposed to gay rights and in favor of family values. It turns out this married man was a closet gay while acting as leader of the Republican Party and promoting morality, family values as well as attacking the evil Democrats who didn't measure up to the Republiccan moral standards. At least the ones they preached even if they didn't follow them.

Of course we always will have the example of good old Republican Newt Gingrich, former Congressman and Speaker of the House, who just this month spoke at the Rock Church in Virginia on his topic "Rediscovering God in America." Yes, the same Newt Gingrich who was committing adultery while attacking Bill Clinton and promoting Republican family values. The same Newt who demanded a divorce from his wife Jackie while she was still in her hospital bed recovering from cancer and the same Newt Gingrich who refused to pay support to her after the divorce. Apparently he has rebounded back to his former self righteous self. I guess that would make him a born again hypocrite.

Some lesser known winners of the big phony award include Republican Congressman Bob Barr of Georgia who preached against abortion, gay rights and sponsored anti gay marriage legislation with:

Which might be OK if he had not been married three times, paid for his second wife's abortion and was photographed with strippers.

Or what about Republican Congressman Ken Calvert who promoted "family values" to get elected and raise money. He became the hero of the Christian Coalition until he was caught by police with a prostitute and captured only after trying to run away from the scene.

We also saw the Florida Chairman for McCain's presidential campaign arrested for soliciting a male undercover police officer for oral sex. Of course, before getting caught he spoke in favor of famiy values and against gay rights as well as authoring a bill making it a crime to do what he got caught doing when he served in the state legislature.

Closer to home we had Spokane Republican Mayor Jim West who while in the legislature supported a bill which would have barred gays and lesbians from working in schools and day care center. He proposed that any sexual touching between teens be made a crime. Then the newspaper found out he had a gay relationship with an eighteen year old boy he hired to work for the City.

These are only a few examples of the loud mouth self righteious people who have been exposed as being total hypocrites. I don't pretend that only Republican politicians are guilty of scandalous conduct, but I do say that it's the Republicans who are always preaching morality and family values. They are the ones who are fanatical in their opposition to abortion for any reason and while spewing hate against gays. They do it because they want the support of the Christian coalition in order to get elected, but secretly live another life. That's because the Republicans used the Christian coalition to get elected so they needed to sing their song. These Republicans are the same ones who have been so quick to jump on any one else's errors for violating God's laws while they secretly have been doing the same or worse. That, my friends, is not politics. It is called hypocrisy.