I was captivated by Ken Burns wonderful documentary The War shown on Public Televison http://www.shoppbs.org/product/index.jsp?productId=2784344=. What really impressed me, however was Al McIntosh who was the editor of the Rock County Star-Herald in Luverne, Minnesota. (For more on Mr. Burns see Wikipedia http://en.wikipedia.org/wiki/Al_McIntosh) There is also a book Amazon sells of his writings Selected Chaff: The Wartime Columns of Al McIntosh, 1941-1945 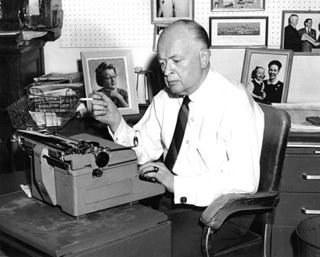 His writing was simple, clear and moving. I published about him in this blog https://paulluverajournalonline.com/weblog/2008/04/if-you-watched.html. I also was curious about an editorial he had written entitled A Tired American Speaks Out because it had been reprinted all over the United States. As much as I searched on the web I couldn't find it. Finally, I searched newspaper achieves and located it. I published it in this blog https://paulluverajournalonline.com/weblog/2008/04/a-tired-ameri-1.html

I received more comments about Al McIntosh then many of my other postings. Clearly he was a unique man. Dick Connell has shared with me this personal recollection of Al McIntosh which confirms my impression of what a very unique man Al McIntosh was. Here is Mr. Connell's comment for which I thank him.

Enjoyed your site. Having lived a block away from Mr. McIntosh for 26 years the stories written today do not come close to painting the picture of the man. Just imagine what it feels like to live in a town of 4,000 people and on any day of the week you can see – Dick Nixon come driving up, Harry Truman in a stretch limo, Ike looking in better shape then his secret service staff of "2", every governor and candidate Minnesota had, Hubert Humphrey standing on the sidewalk in front of the Star Hearld waiting

for McIntosh to come to work and teasing him about driving a big white Cadillac instead of walking the six blocks. There are dozens more in the gallery. They came to Luverne for one thing – to see Mr. McIntosh. His column rattled cages all over the world, yet I doubt if someone could ever find a column that wasn't fair.

The day I left for Army basic Mr. McIntosh saw me standing by the bus stop, which was next door to his shop. He walked over, asked me which fort I was going to, shook my hand, patted my shoulder and said, God Speed. He took a step back, I smartly saluted him and said, Yes Sir. He walked back over and resumed talking to Walter Mondale and a Senator from South Dakota. Meetings were held on the sidewalk so as not to disturb the newspaper staff inside and keep the conversations private as possible.

America doesn't have that 'grass roots flavor' anymore, most likely never will. Things like the computer will keep people from visiting in person where you could say, Mr Spence that last book of yours, The Making of a Country Lawyer, best darn sleep aid I ever bought, two paragraphs a night. Tell me how it ends, I might not live that long. And ….he would have a comeback.

Thanks for the memories.