Flying faster then the speed of sound was unthinkable when flying first began. As airplanes flew faster from the 1930's on pilots began to experience problems due to the increased speed. One example was the Lockheed P-38, used in World War II, which flew normally in level flight, but if they went into a high speed dive there were control problems that often led to crashes and death of the pilot. The military became interested in planes that could safely fly at high speeds.

Air speeds were measured in Mach numbers. Physicist Ernest Mach studied high speed gas dynamics and the speed of an object moving through air or fluid. As a result of his work the speed was measured in units of Mach. Aeronautical engineers referred to the speed of sound as Mach’s number but others simply called it Mach 1. The "sound barrier" refers to the point at which an aircraft moves from transonic to supersonic speed. The challenge was to fly at Mach 1 and faster.

The British began an experimental 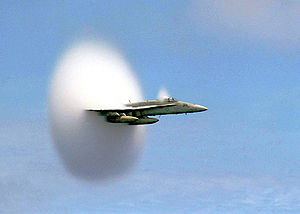 aircraft program and the De Havilland DH 108 "swallow" was developed in 1945. It was tested for flight at supersonic speeds. All three prototype planes were lost in fatal crashes.

The U.S. military had a program testing controlled flight at speeds challenging the speed of sound.

It’s important to understand that the sound barrier was the great unknown. No one knew for sure whether an aircraft could exceed Mach 1 and survive. The pilot of the Swollow was killed trying.

In 1947 an aircraft designed to break the sound barrier, the Bell X-1, was tested. Test pilot Chuck Yeager flew it over the Mojave Desert creeping closer and closer to the sound barrier. On the morning of October 14th he boarded the B-29 which had the "Glamorous Glennis" (named after his wife) strapped under the plane. Yeager had two broken ribs from a fall from a horse, but concealed it from everyone. At 20,000 feet the XS-1 was released from the underbelly at 260 mph air speed. As the test continued the plane dive accelerated until .965 on the Machmeter was obtained. The meter momentarily stopped and then jumped to 1.06 breaking the sound barrier. This was Yeager’s 13th flight and it happened so smoothly that Yeager thought he was seeing things on the meter. Yeager had broken the sound barrier and survived.

One little known fact is that one man broke the sound barrier free falling from space. In August of 1960 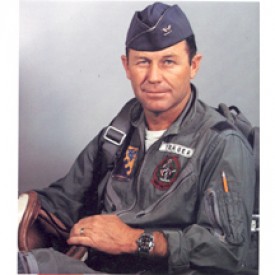 Air Force Captain Joe Kittinger rode a helium balloon into space as part of the new U.S. Space program. At 102,800 feet above the earth, jumped from the gondola wearing only a thin pressure suit and a supply of oxygen. It was 110 degrees below zero and near vacuum in space. His body speed accelerated to 714 mph breaking the sound barrier. Then in his free fall he began to slow after four minutes because of the friction of heavier air as he descended. At 14,000 feet he deployed his parachute and glided down to the New Mexico desert. His jump proved that an astronaut could survive with just a pressure suit at extreme altitudes. He was the first man to break the sound barrier without any vehicle or plane.

The next time you are faced with what seems to be a huge challenge think of Chuck Yeager who did not know whether he and his aircraft would survive flying faster then speed of sound, but had the courage and determination to try anyway. Think of Joe Kittinger looking down into space below from his safe gondola and having the courage to climb out over the safety railing and jump, not knowing if he would survive or not. Courage in the face of difficulty separates the great from the average. Be one of the great.

One thought on “BREAKING THE SOUND BARRIER”