Lita and I have good friends in Scottsdale, Cathie and Tom Hullverson. Before retiring, Tom's verdicts demonstrated that he was of the great trial lawyers of Missouri. He practiced with his brother Jim, who was also an outstanding plaintiff's lawyer and is also retired. Their father Everett was an old time plaintiff's lawyer who represented union workers and injured people back when that was looked down upon by the silk stocking lawyers in the large firms.

Recently Tom sent me the famous photo of President Harry Truman taken on November 3, 1948 where Truman is holding a copy of the early edition of the Chicago Tribune with the headline "Dewey Defeats Truman." 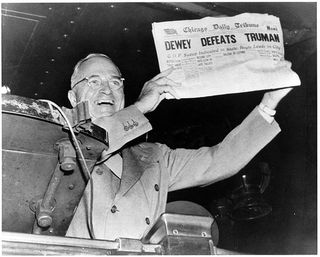 Thomas E. Dewey was the pollster's overwhelming choice to win and the paper had to be published before the results were in so they went with the predicted odds and were wrong. Truman and his family were traveling by train from their home in Independence on their way to Washington D.C. when they stopped in St Louis where 13,000 people greeted them. The caption under the photo indicated that "former Congressman C. Arthur Anderson had  copy of the paper and passed it up to Truman" who held it up for the crowd.

Tom's note about this said:

"… C. Arthur Anderson was a lawyer who worked for my father [Everett Hullverson]  in the 1930's. Law business was tight in those days so Dad gave Art $50 cash to go out to St. Louis County and file for County Attorney or Prosecuting Attorney so that he could make a name for himself and it would bring in business for the firm and for Art.

Anderson went to the county office, but noticed that the filing fee for Congress was only $25  so he files for Congress instead and pockets the extra $25 bucks on his boss Everett Hullverson. The year is 1940. Damned if he doesn't get elected as a Congressman–only a one termer. It was not until this very moment as reported in today's Post Dispatch that I ever knew that it was Anderson who gave the Tribune to Harry for that very famous picture at Union Station-St. Louis, that I've seen for 61 years!! C Arthur was on the 12th floor of our International Building and I joked about the filing fee episode with him over the years. He never explained his 1942 loss in the next election; however some said that he spent less than $25 bucks on his reelection campaign!

Isn't that a wonderful story? I hope you enjoyed this as much as I enjoyed reading it. Thanks Tom