The hero of this story is a dog named Blue who is a Queensland Heeler breed and the family pet. Blue’s best friend is Victoria Bensch, a three year old who lives in Cordes Lakes, Arizona. Cordes Lakes is about thirty miles East of Prescott, in North Arizona high country.

Early Thursday, Victoria was bouncing on a trampoline at her in home in a rural part of Cordes Lakes that

borders on state land. Blue, who had been her companion from birth and was always at her side, was with her on the trampoline. Later she and Blue were on the porch of the house, but after that she disappeared. It turned out that she decided to find the other family dog, Rusty, she mistakenly thought was gone, so she and Blue set off together to search. They were last seen together about 5:00 pm and they left unnoticed. She was wearing only a Tee shirt for warmth.

Not long after she and Blue wandered off, her parents noticed they were missing. After an hour of frantic searching they notified authorities.

Search and rescue searched all night. For nearly fifteen hours relatives and authorities searched for her. A massive ground search was conducted. The temperature dropped into the 30's and the searchers wore jackets for warmth. Horses and scent dogs were used. Flash lights and night vision goggles were necessary. Cars leaving the area were stopped and searched. Registered sex offenders were contacted. The area was rugged with brush and rocks and the search was slow as well as difficult.

When it was light the State Department of Public Safety helicopter took off to join in the search. Searchers hoped for the best, but expected the worst. Shortly before 8:00 am the 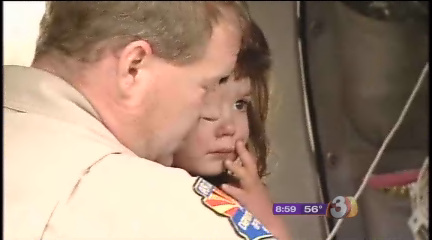 pilot of the helicopter saw something in a dry creek bed about a half mile from the girl’s home. They saw
Blue next to the girl, but She wasn’t moving and was face down. The helicopter landed about fifty feet away and the medic on board ran over. The medic said the girl was facedown in the wash and if it wasn't for her dog, they might not have seen her. But, Blue was acting like he was going to protect her from the medic getting close, until the girl rose up and began to smile. Blue’s mood immediately changed according to the pilot.

"I kneeled down next to her and told her ‘I’m going to take you to your mommy.’ She smiled at me and put her arms up. He said:

"I think once the dog realized we were there to help them out, he was very excited. He ran around while the medic tended to the little girl, and when it was time to go, he jumped right into the helicopter with her and was ready to go."

Victoria’s was bare foot and her feet were swollen, she was covered in dirt and scratches and she was somewhat hypothermic. She was flown to the hospital and treated for frostbite, but was otherwise alright.

The family, search party and everyone involved felt it was a miracle. They gave credit to Blue, who stayed at her side the whole time and was likely her source of warmth during the cold night. The sheriff’s office spokesman said:

"The dog kept her alert, warm and gave her companionship throughout a very cold night."

"She was able to stay warm with the dog. It’s probably one of the things that saved her life." Another said: "We have to give a lot of credit to Blue."

Local TV reported that Phoenix dog trainer Toni Drugmand, who has been training dogs for twenty years said dogs are pack animals that will sometimes assume the role of responsibility when there's an emergency. After hearing Victoria and Blue's story of survival, she's more convinced than ever that dogs are man's best friend. …it brought tears to my eyes," said Drugmand.

As a  dog lover with two dogs, the story brought tears to my eyes as well. Isn't it amazing how animals seem to sense things like this. I'm very happy for the girl and her family, but good work Blue.

3 thoughts on “A DOG NAMED BLUE & A MIRACLE”