We are going to Rome on Sunday (Iceland’s volcano permitting) for a three day legal meeting and then on to Amalfi for a week with our return overnight in London before returning home.

We’ve been to Rome often. Big cities, including Rome, are not my favorite places. The exceptions are London and Paris. We’ve done our touring of Rome previously and plan only a visit to the Vatican & the Sistine Chapel during our three days in the city. The landmark I look for in Rome is the Coliseum because of its history and importance to Rome. 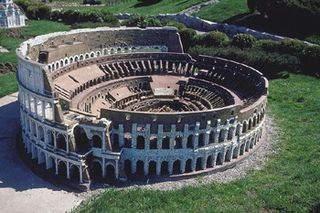 The Colosseum (the Flavian Amphitheater) construction started under Emperor Vespassian around 72 years after the death of Christ. His son was involved in its completion and the opening ceremonies were around 80 AD. It was built with four floors. Each floor was over thirty feet high. The entire structure was about one hundred and forty four feet high. This amazing building held some fifty five thousand people. By comparison the University of Washington football stadium holds some seventy two thousand spectators so the Colosseum was huge. Unlike the Husky stadium, however, the Colosseum was designed with numerous entrances and exits so that a crowd could exit it in less then ten minutes.

There was a wooden floor covered with sand and under that an elaborate underground construction called a hypogeum (meaning underground). There was a two level network of tunnels from stables and gladiator’s barracks. There were also vertical shafts to allow animals to enter the arena floor. The area stored scenery pieces. There was a lot of machinery which used elevators and pulley’s to convey scenery props or animals to the floor. It also appears there was the capacity to flood the arena floor as well. Painters and workers would construct a simulated Forrest with real trees and bushes planted on the floor.

There was a variety of entertainment. These included the animal hunt where wild animals from places like Africa were let loose amount elaborate props like moveable trees and structures to be hunted. While there is not uniform agreement among historians, some believe naval battles were re-enacted in the Colosseum as well. The popular idea of Christians being killed in there may not be historically accurate, however there certainly were Christians martyrs. There were struggles between a fight to the death involving animals and gladiators or between gladiators. The fighters were usually slaves, prisoners of war or condemned criminals.

Gladiators have always captured people’s interest. The movie classic Spartacus was about a gladiator. The movie stared Kirk Douglas along with Laurence Olivier, Jean Simmons, Charles Laughton and Peter Ustinov. It won four Oscars in 1960. It was based upon a slave gladiator, Spartacus, who escaped in 73 BC with a group of other gladiator’s. They rebelled against the Roman’s until defeated. Gladiators continued to be forced to entertain the masses during the history of the Colosseum and the emperors of that era.

I’m looking forward to seeing that wonderful structure even in it’s failing condition. If I have time, I’ll post reports from our travel.