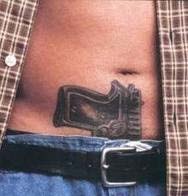 You get all the news here. A couple of news items caught my eye this week. The first two involve a couple of guys who managed to shoot themselves in the testicles. How could they have done that, you ask? Well, to start with, it helps to not use common sense. Our first victim was a macho kind of guy who, for reasons I’ll never know, walked into a Lynnwood Lowe’s Home Improvement store with a handgun stuffed down the waistband of his pants. Maybe he had seen it done on TV and thought it really looked cool. When the gun went off, a police spokesperson said "it made a loud noise and scared a lot of people in the store." Well, I'll bet he was the most surprised person in the store.  He was rushed to Harborview Hospital for treatment, but I think they should have sent him to the psychiatric wing for a mental examination.

But, wait. That’s not all the news about shooting yourself in the testicles this week. In Kokomo, Indiana a man carrying a handgun entered a pantry shop, The Village Pantry, demanding cash. Obviously a big time crook since he picked a pantry store. As the clerk was complying, there was a loud gun shot. Surveillance video shows the robber stuffing the gun, where? You guessed it, in the waistband of his pants. The shot hit his testicles and injured his leg. He was arrested, treated and jailed. There you have it, two genius’s who managed to shoot themselves in the balls by stuffing a handgun down the front of their pants. I’m not too sure what to make of these two reports, but I thought they should not go unnoticed.

Then there is today’s news about the butler who inherited a multi-million dollar estate. Indra Tamang was a teenager living in a Nepalese village without running water or electricity. He could barely write and lived in a straw and mud house with his parents. He managed to get a hotel job in Katmandu where a wealthy Mississippi tourist was impressed with his personality and skills as a waiter. He hired him as a sort of valet and they traveled all over the world and, at times with the man's sister. He provided care for both of them. He tended to them on three continents. He was available to them around the clock. He was paid very little and had no assets personally however. The sister became ill and so he began devote his attention to her. The brother died first and he continued to care for the sister until her death. In her will, she left her entire estate, including two apartments off of Central Park and an extensive art collection to him as her sole beneficiary. The apartments are on the market for $4.5 million and one of the paintings sold at auction for nearly $1 million dollars. The poor village boy from Nepal is now a multi-millionaire.An extraordinary story with a happy ending – at least for the butler. So that’s all the news from here.