I suspect very few young people of today have ever heard Jim Thorpe who died in 1953. Thorpe, whose real name was Jacobus Franciscus Thorpe, was regarded as the athlete of the century and the greatest American football player of his time. He was the most famous American athlete of his time and was selected by the nation’s press in 1950 as the most outstanding athlete of the twentieth century. He was inducted into the Pro Football Hall of Fame in 1963 and there is a larger then life statue of him in the 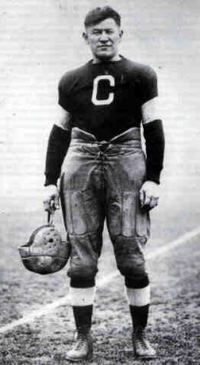 rotunda there. He was also inducted into the halls of fame for college football, U.S. Olympic teams and the National track and field competition. In 1951 actor Burt Lancaster stared as Thorpe in a film Jim Thorpe-All-American. The United States Post Office issued a Jim Thorpe stamp in 1998. In 1973 President Nixon proclaimed April 16th as "Jim Thorpe Day." So who was his extraordinary American Athlete?

Thorpe was born in 1988 in Oklahoma. He grew up in the Sac and Fox native American nations and was of Native American and European American parents. His native American name was "Wa-Tho-Huk." (bright path). He played sports for Carlisle Indian School starting in 1915. He was six foot one in height and weighed one hundred and ninety pounds. His coach was the great Glenn "Pop" Warner who became one of the most influential coaches of his time. His football position was halfback, but he was a star in every sport he tried which included football, basketball, track and baseball. It’s said that Thorpe began his athletic career at Carlisle when he jumped 5' 9" with his street clothes on.

He gained nationwide attention in 1911 as a running back who also played defensive back, place kicker and punter for the school team. He scored all the team's points involving four field goals and a touchdown. It was an 18 to 15 upset over Harvard. And, the next year Carlisle won the national collegiate championship almost totally due to Thorpe.

In the Olympic games, Thorpe also participated in the long jump and high jump competion and won four events. Overall, Thorpe won eight of the two competitions and fifteen individual events. He could run the hundred yard dash in ten seconds flat and the mile in 4:35. His record of 8,413 points in that Olympics stood as a record for two decades. King Gustav V of Sweden presented Thorpe with the gold medals and said: "You, sir, are the greatest athlete in the world." To which Thorpe replied: "Thanks king." On his return he was honored with a ticker tape parade on Broadway. After the Olympics, in 1913, reports that he had played baseball for money before the Olympics surfaced. It was true. It was common for college players to earn a little side money in this way during the summer, but they used aliases and he did not. The AAU was upset at the news. Thorpe wrote them a letter saying:

" …I hope I will be partly excused by the fact that I was simply an Indian schoolboy and did not know all about such things. In fact, I did not know that I was doing wrong, because I was doing what I knew several other college men had done, except that they did not use their own names…. "

It spite of public opinion opposing it, the AAU revoked all of his Olympic medals. This action was controversial and in 1983 the medals were returned to his estate.

During his career he also played as part of several All American Native American teams as well as barnstorming with teams as a professional basketball player. In the game against Army Thorpe scored a 92 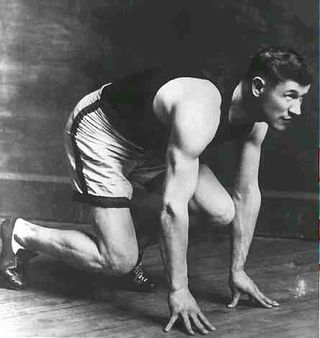 yard touchdown only to have it nullified by a teammate’s penalty. On the next play he ran a 97 yard touchdown. Dwight Eisenhower, who became General Eisenhower and then president of the United States, played for Army in that game. Thorpe was named All American in 1911 & 1912.

In his professional career Thorpe barnstormed across the United States and then the world. He was the celebrity wherever they went. He met the Pope, Kings and played before 20,000 fans in London. He played professional baseball as well as football and other sports at the same time. He retired from professional football at forty one years of age.

During the great depression, Thorpe ended up working odd jobs, fighting alcoholism and lived his life out in poor health and poverty. When his athletic career ended, he struggled to make a living. He played an American Indian Chief in several Western movies, worked in construction and even as a ditch digger. In his later life, he had a chronic alcohol problem. By the 1950's he was essentially broke. He was admitted to a hospital for cancer treatment as a charity case. In 1953 he suffered a heart attack while eating dinner with his wife Patricia Askew in Lomita, California. He died soon after at the age of 64 years.

So, you ask, why do I write about Jim Thorpe now? Well, because the New York Times carried a lengthy article about one of his sons, Jack Thorpe, who filed a lawsuit to recover his father’s remains and move them to the family cemetery plot at the Garden Grove Cemetery in Pottawatomie, County, Oklahoma. It seems that after his death his wife asked the State of Oklahoma to establish a memorial for him, but it didn’t happen. The governor vetoed an appropriation for the plan. His widow was very angry and then  learned that the small Pennsylvania towns of Mauch Chunk and East Mauch Chunk were interested in making a deal to attract tourists. She reached an agreement that they would merge, rename the towns Jim Thorpe, would erect a memorial to him. The towns paid her for Thorpe’s remains, and erected a monument where he was buried.

No trial date has been set in the federal court where the action was filed this year, but his son wants his remains moved back to where he was born and put in the Thorpe family plot.

So, more then half a century after his death, Jim Thorpe is back in the news once again. Certainly, this extraordinary Native American ahthlete deserves the praise and recognition earned for his life in sports. I hope this will not detract from the achievements of his career.

0 thoughts on “JIM THORPE – THE ATHLETE OF THE CENTURY”