The New York Times sports section noted that July 4thwas the one hundred year anniversary of the famous Johnson vs Jeffries heavy weight fight held in Reno, Nevada on July 4, 1910. Called "The fight of the 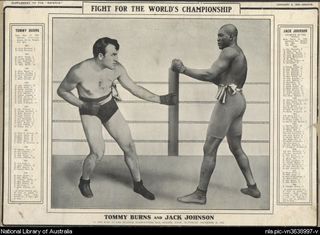 century" by the media some 20,000 people watched a black man, Jack Johnson fight the former heavyweight champion of the world, James J. Jeffries, billed as the "great white hope."

Johnson had angered the white establishment by simply refusing to conduct himself the way white America demanded of African American’s at that time. In fact, he delighted in flaunting is insistence on not doing so. He was the first Muhammad Ali in his rejection of demands he conform to second citizen conduct. He lived a fast paced life and was very public about it. His female companions were white women and he loved fancy cars while smoking a cigar, all done in the face of hostile whites. Worse, for whites, his several marriages involved white women.

Before Johnson, black fighters had been excluded from the race for heavyweight title by the white power structure that controlled boxing. When he beat Burns he became the undeclared heavyweight champion.

The problem was that Johnson kept beating the best white fighters in the country. While he was allowed to fight the championship was off limits to him. World champion James Jeffries just refused to fight him. By 1902 Johnson had won some fifty fights against both black and white fighters. He finally forced a fight with the Canadian world champ Tommy Burns by taunting him and stalking him for the fight for two years until Burns had to fight to save face. He fought Burns in Australia in 1908 and beat him up so badly the fight had to be stopped in the 14th round to give Johnson a TKO win and the championship

When he beat Tommy Burns the white establishment was determined to have a white fighter defeat him. The animosity over having a black champion was so serious that Jack London called for a "Great White 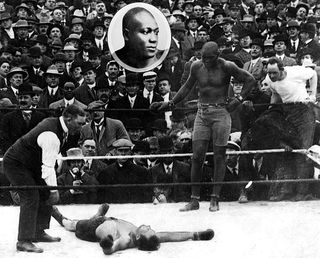 Hope" to take the title away from Johnson. Johnson then faced a series of white fighters who wanted to be that "great white hope" but, Johnson beat them all. As a result, the white boxing establishment decided to pressure the retired champ, James Jeffries to come out of retirement and fight Johnson. Jeffries was very reluctant to do so for a lot of reasons, not the least of which was he thirty five years old, was out of shape and had put on three hundred pounds. But, he was offered a guaranteed $100,000 purse, a $10,000 bonus and movie rights so he grudgingly gave in. Jeffries said:

"I feel obligated to the sporting public at least to make an effort to reclaim the heavyweight championship for the white race…I should step into the ring to demonstrate that a white man is king of them all."

When he entered the ring Jeffries refused to shake Johnson’s hand. Johnson, younger, stronger and in better shape battered Jeffries for fifteen rounds. In that round, after Jeffries had been knocked down twice for the first time in his boxing career, his corner threw in the towel. It’s been speculated they did that to avoid the likelihood Johnson would knock Jeffries out.

Johnson was paid $65,000 for the fight and proved his defeat of Burns hadn’t been an accident and that he was a world champion fighter. But, what followed were race riots all over the United States. Blacks were celebrating Johnson’s victory and whites, feeling humiliated, reacted.

In 1913, he was convicted of trumped up charges of "transporting a woman across state lines for immoral purposes. The woman happened to be his fiancee whom he soon married. Johnson appealed the conviction but left the country, first to Canada, then Europe, Mexico and South America which is why his fights after that were not in the U.S. In fact, he defended his title twice in Paris.

It wasn’t until 1915 Johnson was defeated. He lost his title to Jess Willard in Havana, Cuba. The fight was scheduled for 45 rounds. At age thirty seven Johnson began to tire in the twentieth round and began to be hurt by Willard’s body blows. In the 26th round Johnson was knocked out. When some claimed Johnson took a dive, Willard said:

"If he was going to throw the fight, I wish he had done it sooner. It was hotter than hell out there."

After his defeat, the boxing establishment made sure he was never allowed any chance to regain the championship.

In fact, no African Americans were allowed to fight for the championship again for twenty years. Joseph Louis Barrow (1913 – 1981) was nicknamed "The Brown Bomber." Louis became the

heavyweight champ in 1937 and held the title until 1949. He fought twenty seven championship fights and in 2005 was named the greatest heavyweight of all time by the International Boxing Research Organization. His impact outside the ring was totally different then that of Johnson. He was the first African American to become a nationwide hero in the United States to both blacks and whites.

Probably the most famous of Louis’s fights were those against Max Schmeling. Schmeling represented Nazi Germany’s white supreme race and Louis was the first African American to become heavyweight champ since Johnson. In the first fight Schmeling knocked Louis out in round twelve. But, in the second fight, Louis charged out of the corner and knocked Schmeling out in the first round. Louis became the first true African American national hero in the United States.

On a personal note, I can remember laying on the floor by the radio listening to the broadcast of Louis fights. Most, if not all, of America stopped to listen to the broadcast of his fights. This was particularly true after Hitler's Germany focused on Louis as what was wrong with America and the Schmeling fights.