I was watching a movie the other night involving coal miners and it made me reflect on the fact that I am the son of an immigrant Italian coal miner. After working for the Canadian Pacific Railroad laying track, my grandfather moved on to Coleman Alberta, Canada where he worked in the coal mines with his oldest 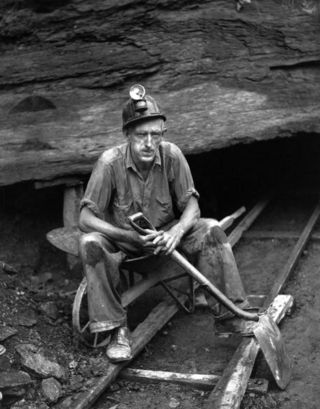 son. He was soon joined by my father who began working in the mines at age fifteen years. Dad was injured on the job and my grandfather developed coal miner’s lung disease so they moved on to Anacortes where I was born. That move made all the difference in the world to my future.

The International Coal and Coke Company, my dad and grandfather worked for, established the town of Coleman in 1903 following the destruction of the nearby town of Frank by a rockslide.Coleman was like other industrial towns in North America. The houses were usually identical and didn’t always have inside plumbing. Outhouses were located in the backyards of homes. Smaller homes consisted of a kitchen, living room and one or two bedrooms. These were small towns. Coleman, at the time, had about 1500 people. The population was made up of immigrants from Poland, Italy, France and other European areas. The buildings were made of wood and fire fighting equipment was sparse.The towns were subject to flood and fire.

The coal company's often didn’t just own the land, they owned the town. They built the houses, buildings and stores which they rented to workers. If the quit or went on strike it could mean an immediate eviction notice. They were required to buy at the "company store" where prices were inflated. Sometimes they were paid only in script which could be used only in company stores. They were provided no equipment and workers  were expected to maintain their own gear including the lamps which was their only light underground.

Coal mining at that time was a difficult and dangerous occupation. The underground work was often damp, dangerous and dirty. Sometimes men could not stand up straight because the ceilings in the tunnel were too low. They often hand picked and shoveled coal ten hours a day. They loaded it on small cars and pushed them to an area where mules would pull the cars out of the tunnel. They breathed stale dusty air and many developed a lung ailment known as "Black Lung." While they used lumber to prop up the roof, rocks would fall injuring, killing or trapping them in the tunnel. Explosive gases accumulated at times and miners were in danger of explosion. They worked long hours doing heavy work and their pay was just enough to survive. Until the unions became a force in coal mining, everyone in the town was subject to the whim of the coal miner operators. Men would start working as a youngster and spend their life in the mine. Their future was bleak and their life hard.

I thought about all of this as I watched the movie and counted myself blessed by the fact they moved on or I might be living in Coleman today. I am blessed by their courage and determination

0 thoughts on “I AM THE SON OF A COAL MINER”