I could rant about the elections and the dismal political future we face with the party of "NO" determined to obstruct everything, but it just makes me get angry and upset. I was planning to talk about the state elections and the initiatives, but I think we are all just sick and tired of politicians and politics.  So, instead, since this is the blog that reports all the news, I have this story to report to you.

I admit I’m a little slow reporting this story, but last April there was a very unusual wake in San Juan Puerto Rico for David Morales Colon who was shot to death in a gun fight. The twenty two year old was a motorcycle fanatic. So, when the mourners got to the funeral home expecting to see his body in a casket, they were very surprised to instead find him positioned on a motorcycle.

The Honda motorcycle was a gift from his uncle and a motorcycle that he loved, so when the family provided the deceased’s most prized possession, the motorcycle to the funeral home and asked them to display him on it. The funeral 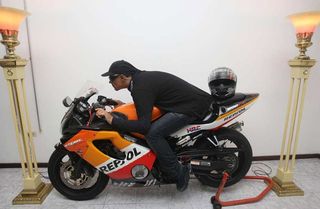 home embalmed the body, dressed him in motorcycle jeans, shoes, with a jacket and hat. They positioned his hand gunning the throttle and his body crouched over the fuel tank as if he was riding at high speed.

According to family members, David Morales Colón was a motorcycle fanatic and would have found the unusual wake fitting. To show you what a high class wake this was, the family played an album by Meat Loaf "Bat out of Hell" at the wake.

His uncle Jose Torres said: "He went out as he wanted." Another mourner told a local San Juan newspaper:

"He loved his motorcycle. It made him feel free from his worries,""We all know he will be happy riding for eternity."

Colon was buried in a casket on April 27th after the Wake.

The Marin Funeral Home in San Juan where the wake was held, has made headlines before with highly unorthodox wakes. In 2008, the funeral home reportedly kept the embalmed body of a 24-year-old man standing throughout a wake that lasted three days. The funeral home says "embalming is the key. It’s a professional secret."

So, that’s my report this week. Now aren’t you glad I didn’t talk about politics instead?