I saw a short video clip of the Inuit people of Arctic Canada gathering mussels in the Winter under the frozen sea ice. It was really an incredible thing to watch. After digging a tunnel down to the beach below the ice, they hurried along looking for mussels to take home and eat. This was done at low tide when the ice was resting on the beach, but leaving caves and tunnels through the ice. See the excellent photo taken by Patrice Halley. www.patricehalley.com 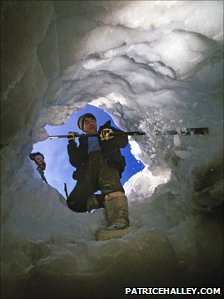 This was possible because of the extreme tides during the Winter when the change of tide is some 40 feet! The frozen ice drops with the outgoing tide and rests on ocean beach and rises again with the fast moving incoming tide. While resting on the bottom when the tide is out, the ice leaves large caves and tunnels under the ice. The people wait for the tide to go out and quickly dig a tunnel down through the ice,insert a ladder and climb down to get to the sandy beach underneath. They quickly search with lights for mussels. They have to work very fast, find the mussels, gather them up and get out before the tide comes back in to avoid being trapped by the incoming water. The work is very dangerous and some mussel hunters have not made it out in time.

There are some 500 people of Kangiqusuijuaq, located near the Hudson Strait, in Northern Quebec, who want variety to their normal diet of seal meat, so they search for mussels in season. In the Winter they wait until the full moon and extreme tides to search for the mussels under the many feet of ice resting on the bottom of the tide flats. They are believed to be the only people who harvest the mussels in this way. The BBC created the video which I saw and which was really fascinating. See: http://www.bbc.co.uk/news/science-environment-12241053

From watching the amazing video it was clear that this was a very dangerous operation because not only is there the threat of the fast moving returning sea water trapping them before they can get out, there is also the

threat of shifting ice from its own weight either crushing them or trapping them since it is no longer supported by the sea water. There is a lookout who stays at the entrance to the hole dug down into the ice who is watching for the returning tide, but even the shouts of warning by the lookout have to be carefully given because the sound can cause a collapse of ice.

This tradition goes back generations at this location. The locals complain, however, that it is getting harder to find places that are safe to dig the tunnel and go under the ice. They say the ice freezes later in the year and melts earlier then it did even a few decades ago. There are also reports that even snowmobile travel has become more hazardous as the sea ice is thinner year by year.

The video was a very remarkable thing to watch and an activity I had never heard of before.