My wife's sister, Monica is an officer at our Gig Harbor Elks Club where her husband Richard is Exalted Ruler. At the last meeting she got talking with a retired Gig Harbor purse seine fisherman Nick Markovich and his wife. She learned they knew my parents because they bought groceries at our family grocery store in Anacortes while running a salmon fishing boat in the summer. He also thought he remembered I had fished on a local seine boat Victory. She told me about the conversation which certainly brought memories back of my early years of commerical salmon fishing. I told her about my experience the year I fished on the Victory. I thought you might find the story of interest. Here it is.

I fished in Alaska on purse seine boats to helped pay for college. When I was in the 9th grade I began 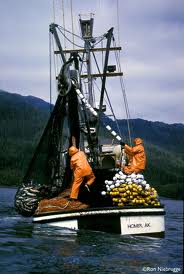 fishing on purse seine boats that would travel to Alaska around late May and return to fish the Sound until September. I fished on a lot of boats including some from Gig Harbor. One was the vessel  Welcome whose captain was John Stanich. I also fished on a boat Don't Worry  and another boat either from Vashon Island  or Gig Harbor named Victory. The Don't Worrywas given that name by owner Dick Suryan because he had borrowed the money from the bank to build it. My memory is that the sister ship built at the same time was The Travelerwhich later was owned and operated by my life long friend Nick Petrish's father.

I was working in the Skiff for the Don't Worry in the early 1950's one summer. The boat was skippered by a man from Gig Harbor, as I  recall. One day I had a near death experience. We set the seine  net off of Cypress Island near Anacortes. The net was strung out in huge U shape with the boat towing one end and the skiff towing the other. I was running the skiff with another crew member helping. The net became caught on an underwater snag or rock while we were towing it. The tide was running strong and it pushed  the skiff away from where the net was caught under water straining the skiff against the net. The end of the net was attached to the skiff and the force of the tide pulled the net under water.

I saw the corks that held the net up begin sinking. The corks began to pop under the water and it was moving rapidly toward our skiff. The usual long line of corks floating in the water between us and the Don't Worry were quickly disappearing. I didn't know what was going on and just stared at this. When the corks disappeared right at the stern of our skiff the force of the tide began pulling the stern of the skiff where the net was tied down under the water. Very quickly the skiff was jerking down lower and lower until it just disappeared from under us.

The other young crew member and I were suddenly both in the water with nothing to hang on to. The skiff was gone and the net disappeared below the water with it. The other fellow with me couldn't swim. The skiff had  just disappeared below the water leaving the two of us in the water with boots, rubber fishing aprons and heavy fishing clothes on. He was thrashing around. I was able to keep him afloat with difficulty as he was terrified and I wasn't too calm myself but I could swim. In the meantime the skipper of the Don't Worry had seen what was happening and realized our skiff was in danger of sinking. He dropped their the end of the fishing net and steamed full speed to rescue us. But, full speed on this old boat was about 6 knots and it took time to disconnect their end of the net before they could steam full speed towards us. In the meantime I'm fighting the other guy in the water to keep him afloat as he is in a panic. The boat got to us in time and we both were pulled aboard OK.

Afterwards, we then went about trying to retrieve what was left of the net and to pull the sunken skiff up. We got back lead line, cork line and I think the skiff but it was a a disaster and the end of fishing. The skipper asked if any of us would help make a new net. There was no pay for this but I had nothing better to do so I agreed while I think some of the others looked for another boat. Besides I really liked the skipper and I liked fishing with him. Anyway, we sailed from Anacortes to Vashon I think, not Gig Harbor, but it could have been Gig Harbor. The skipper had a net shed. When we finally got there after a long trip we hauled the torn net off the boat and began making a new net. It took a week, as I recall, because the net was in such bad shape. The season was over for that boat and I went back to Anacortes to look for a job on another purse seine boat. I got one on the Victory working in the skiff. It was late in the season and fishing wasn't good. I think by the time that season was over I made $200 or maybe I even  owed that much. All I know it was a disastrous summer for me financially.

Life has strange coincidences. Years later I had left the U of W for St Martin's college near Olympia because I was trying to figure out what to do with my life. While there I happened to run into my old fishing mate from the skiff adventure. He told me that he was going to Gonzaga law school night law school. I decided that since I had no clue what to do with my life I'd give law school a try and drove to Spokane to find out if I could get in. They accepted me and that Fall I showed up. There was large crowd for the first year class. My friend was there. By the end of the year, however, most of the class had failed to get the grades required to stay in law school. By the start of the second year only a small group were left and by the  time I graduated there were only about thirteen of us in the class. My fishing friend was gone the first year.