Phyllis Diller wrote an autobiography she titled:  Like a Lampshade in a Whorehouse. In addition to describing a rather dysfunctional life while living as a famous comedian she wrote some humorous things. From one of 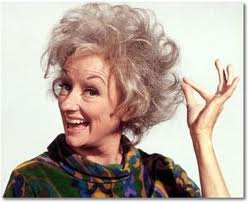 "Fang, the idiot, was watching television one night and guy was showing how to use a condom by putting it on a sock. Now Fang is carrying a sock in his wallet."

She also said: "The contraceptive for old people is nudity…"

In another comedy routine she said:

The newlyweds were going on a honeymoon cruise and the wife went into a drugstore and bought Dramamine and contraceptives. The druggest took her aside and said, 'Listen, if it makes you sick wehy do you do it?"