In March I published a report about a famous Japanese dog Hachiko. He is famous for having continued to go to the train station to meet his master every day for years after his master died at work of a heart attack. He was so famous a statute was erected at the train station in his honor.  https://paulluverajournalonline.com/weblog/2011/03/hachiko-the-words-most-loyal-dog.html 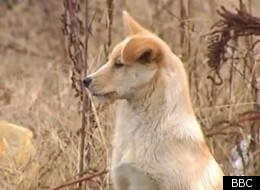 Now we have a report of an unnamed dog in China whose owner died earlier this month and who refuses to leave the grave site of his owner. Lao Pan was a 68 year old man living in the village of Panjaitun. He had no family and his only companion was his dog. When Lao Pan was buried, the dog refused to leave the grave. Villagers found him lying at the grave and in spite of their efforts, he refused to leave, spending  seven days without food or water. One villager says he tried to get him to leave to come home with him by feeding him steamed buns, but he dog took the food and ran back to the grave. Another villager took him home with him in order to give the dog a new home. But, the dog quickly escaped and went back to the grave. The dog refuses to leave, seemingly protecting the grave.

The villagers have decided to build him a kennel at the site and are bringing him food every day. The dog still is at the grave site.

Dogs are amazing companions we can become attached to with such affection it is like the loss of a loved one when we lose them.