Trish Vickers is a 59 year old woman who lives in Charmouth, Britain. She had operated a gift shop there. but developed diabetes and seven years ago became blind as a result. She decided to write, however she doesn't type or use computers. Instead she uses a system of rubber bands stretched across a writing pad as a guide for the ball point pen as she writes. She began to write poetry with this system. Then she was inspired to write a novel. The plot she developed in her mind was one regarding a woman named Jennifer who loses her job, her boyfriend and then successfully rebuild her life. She had a tentative title for the book and while working on it thought about how she would find a publisher. 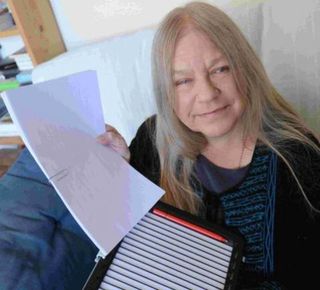 She began working on her novel, writing with a ball point pen and the system of rubber bands to keep the lines straight. She worked very hard on the project. It was slow going but she managed to finish 26 pages of the novel.

Her son Simon visits her weekly and she was looking forward to his next visit so he could read what she had written and tell her what he thought of her novel. When he arrived she showed him her pad and asked him to read what she had written. Her son took the writing pad and after a long pause had to break the news to her that all the pages were blank because the ink in the pen she selected had run out and was empty. She was devastated.

After the shock wore off she and her son thought about it and decided to ask the police if there was any way they could help. She said: “We battled with various ideas until we thought of the police. We rang them and asked to speak to their fingerprint section. They said if there was anything they could do, they'd be happy to help." The forensic experts at the Dorset police department took the papers and agreed to see what could be done in their spare time. It took one of them five months of work done during lunch breaks using a technique involving shining light from various angles on the indentations made in made in the paper by the pen to read what she had written. Except for one line, they were able to recover the entire writing she had done. Forensic expert Terry Savage said:" it was nice to do something for somebody, and it was nice to read the book as well."

Mrs. Vickers was so thrilled she called the local newspaper and the story went worldwide. It was reported on television, the Internet, radio and national newspapers including the BBC New York Times and websites around the world. Mrs. Vickers was amazed. She said: "I wanted to tell the local newspaper to say thanks to the police and promote them. But, it went ballistic and I found myself at the center of a worldwide media frenzy." She say: "it is an inspiration to get it finished now and get it published"

A volunteer now visits once a week to type up new passages of the work, and Mrs. Vickers says she plans to send the finished novel to a publisher.

I know there is a lesson of life here for all of us, but I'll let you decide what it should be.