Public radio KUOW carried a story, today, about the Idaho Republican party and its transformation from its traditional character. Apparently there are now strong factions within the party at odds with one another. One member of the party was quoted as saying:

"I visualized myself as more conservative than many, and that's what I thought until I was rudely awakened by some of these other people who started calling me a liberal." 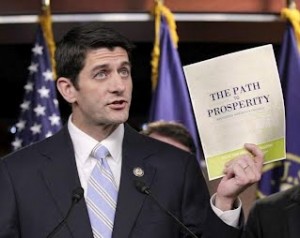 Idaho has been so Republican that the joke is the Democrats could hold a quorum in a telephone booth, but today it appears the Republican party is a mix of Constitution Party members and Ron Paul libertarians as well as Christian Patriots and Tea Party activists. In Kootenai County the power struggle between the factions has become personal. There is a defamation lawsuit between two Republicans, a case where one side hired a private detective and dueling splinter groups. There are two separate groups calling themselves the Reagan Republicans and one threatening the other over the title.

One man, Bob Petersen, is seen as the architect of the conservative takeover. He organized a group called Rally Rights and began a process of replacing precinct committeemen with members from his group. He was quoted as saying he personally reviewed each person selected to run for the position with what he calls "the conservative creed" and  asked them questions like these:

"Do you believe in God? Do you believe God was in the foundation of this country? Do you stand for traditional marriage? Do you  stand against abortion?"

He asked them about their stand on states rights "as protection  against federal tyranny" and about their stand on income taxes. People who passed his test were backed and won the majority of the precinct races. Peterson has big plans and is working with conservative groups in Washington, Oregon and Montana to bring the same changes there.

Imagine any major political party in the U.S. today who only allowed members that agreed with these ideas. How unrepresentative would that be of our pluralistic society with multiple religious ideas and  differing philosophical beliefs. You would not have a political party. You would have a religious membership.I gather, if Bob Petersen and his fellow Idaho colleagues have their way, that is exactly what they want.

Apparently, rather than create a third party, they have decided to hijack the Republican party through infiltration and take over. In light of what has happened politically since President Obama ran and was  elected there is evidence this is not limited to Idaho but has and is happening nationally to varying degrees. It would explain the bizare behavior of the Republicans refusing to participate in their elected duty of governing in Congress – the "just say no party" – to the support of candidates who would be seen as unqualified and fringe members pre George Bush. Think Sarah Palin, Herman Cain and Governor Perry for example.

More significantly, while there is nothing wrong in believing in the answers to Bob Petersen's litmus test for precinct committee positions, it is terribly wrong to close the door to Republican party membership for anyone who doesn't agree. A Republican party made up exclusively of those who accept these questions as true is not a Republican party, but a whole new third party flying under false colors. Both the Democratic and Republican parties are traditionally a mix of people of different religious, civic and patriotic beliefs who are united in a singular general philosophy of government. But, this is now being changed by the Republicans to a group of people with the same fundamental religious beliefs.

For a group professing to restore God in politics I am appalled by members lack of compassion and "everybody for themselves" attitude." We saw that in the audiences during the Republican debates when they applauded the idea of the poor being denied hospital care they couldn't afford and in other examples. I think the selection of Wisconsin Congressman Paul Ryan as the vice presidential candidate is illustrative of the new hard hearted attitude. Here we have a man who says he is a devout Catholic but whose plan to restore the economy is premised on cutting off the poor needy from financial support and gutting Medicare as we know it. His position on finances is so severe that even the right wing U.S. Catholic Bishops (who are semi closet Republicans) have written a series of  letters to Ryan pointing out his planned  budget and tax reforms will "hurt the hungry children, poor familes, vulnerable seniors and workers who cannot find employment."

While thinking about the Ryan-Republican attitude towards those in need, consider the fact that total political spending on elections this cycle is estimatedto reach nearly $6 Billion dollars according to  the Center for Responsive Politics. That's $400 Million more than the record breaking amount spent  in the last presidential election cycle in 2008. There is something very wrong with politics in America today.

2 thoughts on “THE NEW IDAHO REPUBLICAN PARTY – ONLY IN IDAHO?”