"That man over there says that women need to be helped into carriages, and lifted over ditches, and to have the best place everywhere. Nobody ever helps me into carriages, or over mud puddles, or gives me any best places! And ain't I a woman?" Sojourner Truth 1851 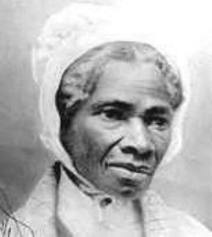 Coast. She changed her name from Isavella Baumfree to Sojourner Truth in 1843 because she told her friends: "The Spirit calls me and I must go." She had obtained her freedom and left to travel while preaching the abolition of slavery. She said "The truth calls me."  She gave speeches across the country for women's rights and against slavery. She spoken at the first national Women's Rights Convention and became famous in spite of her lack of education. After a lifetime of activity she died in 1883.

"it was we, the people; not we, the white male citizens; nor yet we, the male citizen: but we the whole people who formed the union…women as well as men." Susan B. Anthony 1873

Everyone knows who Susan Brownell Anthony was. Born in 1820 she died in 1906 and was an American civil rights leader who had a leading role in the 19th century struggle for women's rights, especially the right of women to vote. She traveled the United States and Europe averaging some 75 to 100 speeches per year.

In November of 18972 she was arrested for voting in the presidential election and was convicted seven months later in spite of her stirring and eloquent arguments. She refused to pay the $100 fine however. It wasn't until 1920 that women were allowed to vote in the United States.