This is a compelling story by Daniel James Brown not only because of the excellent story telling but because it involves the University of Washington crew that went to Berlin and won the eight oar crew Olympics race of 1936. For me, it also had a personal connection in the stroke on the boat was Don Hume who graduated from my high school in Anacortes. All of the members of this crew were from Washington. Places like Anacortes, Squim, Lynden and other places around the state. The coxwain was Bob Moch who became a well known Seattle lawyer. 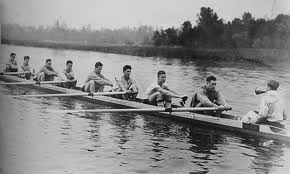 The story tells about members of the crew like Joe Rantz from Squim. His extraordinary life involved being abandoned by his father, stepmother and half siblings when he was 15. He was left at the family cabin on a stump ranch to fend for himself alone while they moved on. He survived by courage and struggle. His older brother offered to let him move to his house in Seattle so he could complete his senior year of high school at Roosevelt. He did move and supported himself with odd jobs. He managed to get into the University of Washington and made the crew. His success as a rower and in simply surviving is a story in itself.

The story of Don Hume is also interesting. He had become bedridden before the big race with cold like symptoms that were serious. He lost 14 pounds during the time he was in Berlin and wasn't going to be allowed to row in the big race until the rest of his team implored the coach to allow it. The coxswain, Moch later described how robot like Hume was during the race and when he yelled at Hume to increase the stroke he was not responsive. So Moch yelled to take over as stroke, Hume suddenly was alert and did what Moch wanted. When the race was over Hume collapsed over the oars and had to be lifted from the boat.

The shell they rowed was made on the U of W campus by the famous shell builder George Pocock. The coach was Al Ulbrickson. The shell they rowed was named The Husky Clipper. It's a story about the underfunded and under appreciated crews from California and Washington against the Eastern establishment rowing teams. In fact, when Washington won the right to go to the Olympics, they were told there was no money and they would have to pay for it themselves, but Princeton had the money. They were invited to step aside and let Princeton go instead. But, with the help of the famous Seattle PI sports writer Royal Brougham they raised the money and this was during the depression. They took the ship to Germany for the Olympics.

Hitler had created the Olympic area for a show case. The propaganda minister, Joseph Goebbels orchestrated these Olympics to demonstrate Aryan and Nazi supremacy. This is the year Jesse Owens defeated the German in the famous track meet to the anger of Hitler since Jessee was both an American and an African-American.

The Americans won the race by six-tenths of a second ahead of the Italians. It was an exciting race. If you want to watch it see: https://www.youtube.com/watch?v=HunZsKugJmY

I have a small and brief connection to U of W rowing that started in the 7th grade. My dad had had build for me a nine foot wooden row boat which I kept tied up at the Anacortes ferry dock where the Guemes ferry dock is now located. I lived about a mile away and in the summer would walk down the wooden steps dad installed from the house to the railroad tracks along the beach. I’d walk the tracks with my dog to where the boat was tied up, carrying the oars with me. We row out into Guemes channel and fish or just explore around the canneries. Most often I’d cross the mile and half channel to Guemes Island and  pull the boat up on the beach. We'd explore and play and then row back.

One day, I had felt like rowing, so I started from the ferry dock and rowed to Guemes Island and then turned and rowed back to the dock with a plan of exploring along the beach. When I got back to the ferry dock area a man called out to me and asked me how often I rowed over and back. We talked briefly about rowing and he told me he was the rowing coach at the University. He told me to keep rowing and come to the University to try out for the rowing team. I was very impressed the rowing coach at the University of Washington had talked to me and told my dad. It turned out that the Ulbrickson family had a cabin on Orcas for years and this was probably  Al Sr. who frequently made the trip from Anacortes to Orcas. I had just happened to be there when he was waiting to catch the ferry and was standing outside.

I did go to the University of Washington on a football & basketball scholarship in 1953. I was on the freshman basketball team coached by Bill Morris, himself a former All American. 1953, by the way, was the year Bob Houbregs was the All American  hook shot genius on the team that went to the Final Four under coach Tippy Dye. I was very proud of a photo taken of Tippy Dye and I who spoke at our high school awards banquet.

One day at the Y I was crossing the quad on campus where two tall poles had been stuck in the ground on each side of the walk with a string tied from one to the other across the walk. There was a sign that said “if you have to duck to go under this string you should sign up for the rowing team.” They wanted people over six feet apparently. I decided to investigate. So, I went to the crew house where the shells were kept to check it out one day  after basketball practice was over. Just by coincidence I wondered into an area where shells were located and got talking to a man who gave me an enthusiastic description about the shells and rowing. In fact, he said he was involved in making the shells and his name was George Pocock.

I decided to give rowing a try and signed up. I expected to get into one of those sleek, long shells, but that’s not what you start out with. What I got on with other boys was a sort of barge with a number of seats for rowing. I thought I was in great shape running up and down the basketball floor, but rowing this thing turned out to be the hardest work I’d done since I had worked in the woods as a logger. It was a lot harder than playing basketball.  I kept it up for a little more than a week and knew I’d never make it. I dropped out and that was the end of my rowing career at the University of Washington. I came away with the knowledge that rowing was a truly challenging sport and with great admiration for those who rowed for the University. Rowing is not for sissy's.