I probably should report the status of my recent problem when my knee replacement  joint gave out requiring surgery to replace a broken piece. It wasn't a huge problem to repair, but required opening the knee to do it. The result is that I am now recovering from the knee surgery with minimal rehab. I can walk on it and have no pain, but I use a walker as a precaution until released by the doctor. I'm grateful it wasn't something serious. The good news is that I am on the mend rapidly without any significant problems. As I tell friends, this is why you don't want to ask old people how they are feeling. You will get reports of bowel 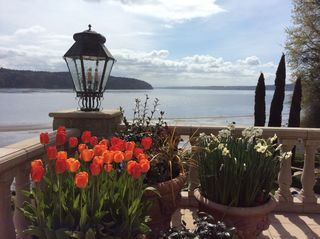 movements, surgery and flatus problems. That's my report on my medical status.

Since I am temporarily unable to go to the office in Seattle I am enjoying our home located on the salt water facing Vashon island. On low tide there is a large sandy beach on our property which the birds and animals seem to enjoy  more than we do. With this wonderful weather I've been sitting in the sun on the porch part of the time observing. The tulips planted on the porch in large pots have come into bloom. it is beautiful with the landscaping coming into color. Colvus Passage, the body of water between our property and Vashon Island has been calm like a lake.

Yesterday, a pod of some five or six killer whales came through in front of our house in Gig Harbor. Huge fins cutting in and out of the water, rolling a litle ln their sides as they did so and showing a white  mark along with loud sounds of air blowing as they cruised on through heading South. They were on the surface most of the time. There was a small boat following them with two people observing who were wearing Orange vests so I suppose they were officials of some kind monitoring them. I watched for as long as it took for them to move out of sight. Then, this morning I was surprised to see them again. They were about the same distance from shore  and moving in the same way through the water. No observer boat this time, however. They had turned around and were heading North in the opposite direction. I don't know where they are going but it was as much fun as a parade.

Four or five deer were on the beach yesterday. One waded out a short ways into the water and the rest just walked around. I think they were cooling  off. I worry about them exposed that way on the beach, but they don't seem nervous and slowly amble back into the vegetation after a short spell. This morning two does and a fawn were wading in the salt water enjoying the sun. I'm  told they drink the salt water for the salt. They were having a fine wade when our dogs began barking, sending them rushing off the beach and back into the hillside vegetation.

Our annual migration of Terns has also arrived. Hundred of the small birds show up in flocks and are on the beach at low tide making loud gull noises. They leave as tide comes in and then return again. They do this for a couple of weeks. After making a lot of racket they move on to wherever they are going. They are fun to see and hear.

The bald eagles on our property have been active. They seem to be around depending upon the fishing in the channel. Swooping around and making their sound that is so distinctive they entertain us for periods of time.They also land on the beach and strut around drinking the fresh water that we have in a couple of streams from the upper land that run down to the beach. They are impressive birds and I'm glad they make their home on the property.

Last night we saw what has been on the news,the "blood moon." Apparently, it involves the moon completely covered by the earth's shadow for four eclipses in a row. It's said to be a rare occurrence in history with hundred years spans between. Before the cloud cover blocked the view we saw a bright yellow/reddish moon that developed a shadow that started at the top and slowly moved down the moon until it was totally in shadow and then it began to light up again in the same manner. It was quite a show really.

That's my report of my observations since I'm not able to drive to work in Seattle and am able to enjoy this beautiful state and our home.

One thought on “A PERSONAL UPDATE”