Last Sunday the Catholic Church canonized to new Saints: Pope John 23rd and John Paul the 2nd. These were two very different pontiffs. The easier one for me to evaluate was John who was so clearly a holy and decent man. There are a large numnber of Catholics who are John Paul supporters and who believe him to be worthy of sainthood. There are also a large number, including me, with serious reservations 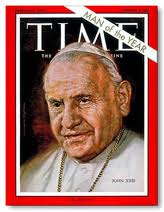 about naming him a saint. So, to those who are offended by my views I can only cite the 1st Amendment of the U.S. Constitution.

John 23rd's given name was Angelo Giuseppe Roncalli, the 4th of 14 children born to a family of sharecroppers living in a small village in Italy. He was an unpretentious man who bought a round-trip train ticket to come to the Vatican conclave for the election of the new pope. He said things like: "it often happens that I wake up at night and begin to think about a serious problem and decide I must tell the Pope about it. Then I wake up completely and remember that I am the Pope." He also said once, "Italians come to ruin most generally in 3 ways, women, gambling and farming. My family chose the slowest one."

He was 77 years old when he was elected in 1958 to succeed Pius XII. It took 11 votes to elect him and not much was expected of him and he was referred to as a "caretaker Pope." He was only a Pope for 5 years, but he was an extraordinary innovative leader. He surprised the Vatican bureaucracy by calling for a Vatican Council in 1962. He talked about "throwing the windows of the church open" and sought reconciliation with Protestant religions Jews and other religions. For the entrenched bureaucracy at the Vatican he was a scandal. In fact his 2nd Vatican Council made momentous changes in the church. Unfortunately he did not live to see the completion of the Council. He died of stomach cancer in June 1963. He became known not as the "caretaker pope" but as "good pope" who was admired by both Catholics and persons of other faiths. In a short five years his 2nd Vatican Council revolutionaized the Church, it's liturgy and it's doctrines. However, that frightened the pope who followed him.

His pontificate was followed by the election of the 2nd person canonized as a saint on Sunday, John Paul the 2nd. Where Pope John had seen brothers in other faiths, was on intent upon making the liturgy at the church relevant to ordinary people, and otherwise determined to modernize the church, Pope Paul had an opposite goal in mind. Maureen Dowd a columnist for the New York Times wrote an article she entitled "a saint, he ain't."she was referring to Pope John Paul.

This pope was the 2nd longest serving pope in modern history and the 1st non-Italian pope since the 1500s. John Paul was pope from 1978 to 2005. While he was credited with and recognized as a primary force in ending communist rule in his native Poland, he was also fearful of church reforms and what he saw as liberalization of the church. Cardinal Joseph Ratzinger, who later was named Pope Benedict the 16th, was named by John as the prefect of the Congregation for the Doctrine of the Faith.This is one of the most important agencies of the Roman curia and had extreme power acting for the pope. He was also the Dean of the College of Cardinals which gave him authority over the cardinals of the Church. In short, he was a very powerful assistant to the Pope. He had  started out as a liberal theologian but became a very conservative one, defending traditional Catholic doctrine and values. As a result, John Paul, who shared his view put him in these positions of power to carry out his conservative viewpoints and take action against those in the Church they saw as a threat to the Church. It was Ratzinger who was the enforcer at the Vatican. He and John Paul undermined the teachings of the 2nd Vatican Council in their effort to return the church to pre-Vatican II beliefs and doctrines. This is why Dowd is reflecting the attitude of many Catholics when she writes about John Paul: "A saint, he Ain't."

John Paul and his right hand enforcer, Ratzinger, were the delight of conservatives because they ran a Vatican that tolerated no dissent. John Paul also has been legitimately criticized for his lack of action regarding child abuse in the church. When Cardinal Bernard Law had to resign in disgrace over sexual abuse scandals under his leadership in 2002 as the archbishop of Boston, Pope John brought to the Vatican and gave him a positon. Father Marcel, who created the order of the Legionnaires of Christ, was one of the largest fundraisers and financial supporters of Vatican enterprises and a close friend of the pope. But he turned out to have sexually abused seminarians and had illegitimate children with at least two women.

For some 27 years, this pope appointed bishops and cardinals who thought the way he did about the need to return to tradition, conservative viewpoints and the need to  suppress liberal ideas. This collection of church bureaucrats did all they could to undermine Vatican II policies and teaching. They maintained their fanatical adherence to the evil of contraception in the face of worldwide laity ignoring them. They suppressed theologians from discussing theological issues. They approved the denial of communion to politicians and others who they felt were taking public stands against their views of moral principles. They acted out for over twenty years a Church program of a return to the time before John 23rd was elected Pople.

When Benedict was elected Pope in 2005 he continued with the policies of John Paul. He promoted the Latin mass, defended long-standing Catholic doctrine,appoinjted conservative bishops and cardinals and reintroduced pre-Vatican II traditions. In February 2013 he resigned citing a "lack of strength of mind and body" due to advanced age. He added another eight years to the previous twenty seven years of conservative vatican administration while thousands of Catholics around the world stopped being Catholics because of them.

We now have an elected Pope, Francis,who appears to have the same openness, love of fellow man, and unpretentious attitudes as Pope John XXIII. However, he faces an army of bishops and cardinals appointed during the long reign of John Paul and Benedict who's viewpoints generally reflect the mindset of these two previous popes.Given Vatican bureaucracy and politics, Pope Francis has his work cut out for him.