There has been so much media reporting about immigrants recently it has reminded me of how blessed and privileged I am to have been the child of immigrants. Mother's family immigrated from what was Hungry-Austria, now Croatia, and the tiny island of Brac all the way to Anacortes, Washington. Dad, his parents and his siblings all immigrated from the poor area of Calabria- down in the toe of the boot of Italy ending up in Anacortes where they eventually met and married.

My parents had to work to support their families and only were able to get a grade school education. They had to  learn to speak English. And, yet, they were able to send their three children to 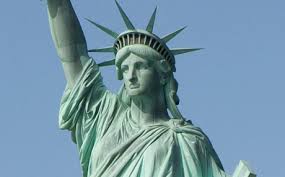 college and make a life here in the United States.

Dad had life long gratitude for what he believed was the privilege of coming to America and being allowed to become a citizen. He flew the American flag in front of our house every day and taught us children that it was a privilege to live in this country. As a result we were obligated to get a good education and pay back to the community and the country for what we had been given.

I saved this letter he wrote to the Anacortes American On July 2, 1986. It  reflects this immigrant's views about his adopted country.

as an Italian immigrant I came to Anacortes in 1918, after working for several years in coal mines in Coleman, Alberta Canada. It could only happen in the United States, nowhere else in the world would I have had such an opportunity, for self betterment. I am so thankful that my father selected to immigrate to the United States instead of looking for work in Germany, France, England or Scandinavian countries. Because in all of them even though you have lived there one hundred years, you are always a foreigner. In our great United States of America, after living here for five years, behaving herself, paying all due taxes and learning the American language and the form of government, you will be admitted as an American citizen. You are no longer German, English, French or Italian etc. The sky is the limit as to where you may go financially and politically.

I arrived in Anacortes in 1980 with $5.15 in my pocket. I worked in sawmills, shingle mills, is a grocery clerk and in 1922 open my own grocery store. With my wife Mary, we operated Luvera's Market for 35 years. In the meantime, I was elected president of our Anacortes Chamber of Commerce and Anacortes Rotary club, state president of the Washington State Food Dealers Association and, later, as State Senator. Our three children Phyllis, the Paul Junior, are university graduates and professionals. Mary and I live in an elegant home. Now I ask you, could all of this had happened to me in any other part of the world? I say most assuredly – no! This could only happen in our wonderful United States of America! God bless America.

With this background I can't help but be supportive of immigration rights and the treatment of immigrants that made America the great "melting pot of world." Let's remember these words from what is written on the Statue of Liberty:

"Keep ancient lands, your storied pomp! cries she with silent lips. Give me your tired, your poor, your huddled masses yearning to breathe free, the wretched refuse of your teeming shore. Send these, the homeless, tempest-tost to me, I lift my lamp beside the golden door."