My grandfather, Nicola Luvera died in Anacortes on Independence Day, July 4, 1956 after living more then ninety years. My chief regret is that he spoke no English and I spoke no Italian so we never had a real conversation – only through my father's interpretation. Dad believed his children should learn and speak English because we were Americans. In addition, mother's families native language was Croatian since they had immigrated from the Island of Brac in Croatia.

My grandfather's story is one of courage and determination. After working in a slaughter house in Italy 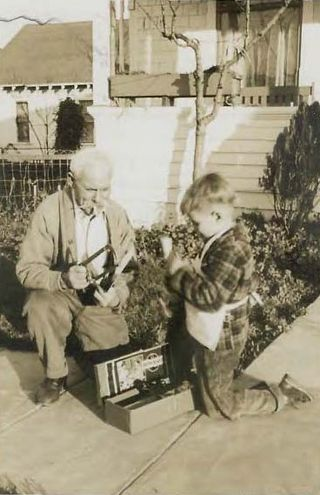 for twenty cents a day he decided to try to find a better life for his family in America. He managed to borrow money from relatives to sail to the "new world" where his relatives had found work. In 1902, he left and made his way to Montreal, Canada where he had cousins working for the Canadian Pacific Railroad. They were section hands installing the railroad track from Winnipeg to Manitoba. He got a job working with them doing hard manual labor. The men lived in tents along the tracks they were installing and were paid $1.00 a day. Nonno learned only a few words of English and was not well educated, but he was a hard worker.

He saved his earnings and in 1905 returned to Italy. My dad was six years old and remembered the day he came home. He said Nonno covered the windows, gathered his wife and the children around the kitchen table and took a heavy money belt, hidden under this clothing, from around his waist. Out spilled gold coins on the table. Dad was amazed at the sight of the gold as they had never seen anything like it.

After a short visit, Nonno left with the oldest child, Salvatore, who was only sixteen, and they went back to Canada. The two of them worked and saved money until they had enough to bring Nonna and the rest of the children to America. By 1911 they had paid off the original loan and had enough to send for the  family. Nonna took the children to France where they took a German ship to St John Brunswick. They sailed in the least expensive way, at the bottom of the ship in steerage. Dad was twelve years old and remembered the trip. He remembered sneaking to the upper first class decks,where he was caught and sent back down into steerage.

In the meantime, Nonno and Salvatore had found better paying jobs in the coal mines of Coleman, Alberta. They were working for International Coal and Coke Company in Coleman so Nonna and the children had to travel across Canada to get there. She spoke no English so the trip with the children was difficult. It took several days to arrive in this town of about one thousand people. Dad remembered It was below zero when they got there in February. They had left the warmth of the South of Italy, Reggio, and the cold, snowy weather was a shock for them.

Nonno and Nonna could speak little English, but dad learned to speak it well and after several years was able to borrow money to open a small family grocery store in Anacortes at 7th and Commerical. "Luvera's Fruit Store" offered home delivery and credit. Nonno quit his job to be in charge of the vegetable and fruit displays on large stands right at the front of the store. The walls would open to the the sidewalk and Nonno's displays were a work of art. If you have seen the fruits and vegetable displays at a county fair, you know what his fruit and vegetable stand looked like. He was very proud of  of his work. For many years he worked at the store every day with dad.

As long as I could remember he smoked Lucky Strike cigarettes. They were unfiltered and he smoked them until the burning end got very close to his mustache. I would come to the store on weekends and Nonno kept  his carton of cigarettes in the back of the store. When I was a youngster of about twelve I stole packages of cigarettes from his carton. While smoking the stolen cigarettes at home while concealed under the next door neighbor's porch I managed start a small fire which with a lot of smoke. The fire department was called. I was caught and my mother was very unhappy with me. But Nonno told dad he was relieved to find out I had been taking his cigarettes because he had been worried that he was smoking too much since the carton was more empty then usual.

He and my grandmother lived in a small house with a large garden and rabbits. Nonna was an excellent cook and I have vivid memories of going there with our family on weekends to spend time with them. He was a short, small man with a large mustache. In his later years, after Nonna died, his circulation was enough of a problem that he lived with us so mom could take care of him which she did with loving care for a considerable time.  He was a sweet, gentle man who had worked hard his entire life. He and dad were very close as father and son and his death was hard on Dad even though Nonno had lived a very long life.

I regret not hearing his life story first hand from his view point. However, I'm blessed with this wonderful immigrant's story as part of my life story.