I have just finished reading a lengthy book In the Clutches of the Law edited by Randall Tietjen.  I suspect that no court room lawyer has achieved more notoriety then Clarence  Darrow (1857 – 1938) his many famous cases included the Scopes trial where he defended a schoolteacher charged with the crime of teaching evolution and the Leopold and Loeb case where he argued against the death penalty for two young men who had brutally murdered a young boy. He also wrote a large volume of letters. This book 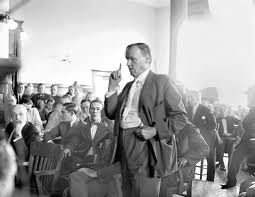 contains over 500 letters written by  Darrow. They cover a number of un-related subjects. Here are a few of these letters.

A news editor wrote to him asking some questions which he answered in a letter dated April of 1937. Number one: Do I wish that I had done differently? I am fairly well satisfied with the way I have lived and acted. Number two: what do I regard as having done the most good? My strong feeling of tolerance towards all things and my constant belief that no one is responsible for his makeup and his acts; this, of course, is hostile to the unscientific belief in free will. Granted that we are burdened with many abnormal and misfit humans, who are the victims of their own conduct, nevertheless they deserve to be treated as patients and institutions instead of imprisoned and punished….. Number five: have I a guide to offer those entering the legal profession? I would like to see a crop of lawyers developed with more genuine, humane ambition to benefit the poor and unfortunate clients, rather than mainly themselves. Number six: regarding my attitude towards religion. I feel as I always have, that the earth is the home and the only home, of man, and I'm convinced that whatever he is to get out of his existence he must get while he is here. Signed: Clarence Darrow.

Those of you familiar with the Scopes trial will recall that Darrow had an opportunity to cross-examine William Jennings Bryan who was prosecuting the case until the judge stopped the cross-examination in order to protect Brian. In 1923 he wrote the editor of the Chicago Tribune after it published a letter from Brian supporting laws prohibiting teaching evolution.  Darrow's letter said: "for this reason I think it would be helpful if Mr. Bryan would answer some of the following questions:

Is the account of creation of the earth and all life in Genesis literally true or is it an allegory? Did the sun stand still to give Joshua time to fight a battle? If the sun had stood still, would that have linked in the day? If instead of the sun standing still, the earth had stopped revolving on its axis, what would've happened to the earth and all life thereon? Can one not be a Christian without believing in the literal truth of the narrations of the Bible here mentioned?

Throughout his letters Darrow's pessimistic view of life is apparent. He was a great orator and debater. His skill as a courtroom lawyer is undisputed. Some of his arguments to juries were hours in length and in the LA case where he was the defendant, charged with bribery, his portion of the closing argument had the judge and jurors in tears. The problem with this book, however, is that it lacks the context of reading the letter he is responding to with his letter. Footnotes help, but aren’t enough. Nevertheless, I enjoyed the book as thick as it is at over 500 pages.