For many years Lita and I have been friends with a trial lawyer in Fort Lauderdale and his wife, Shelly and Bobbe Schlesinger. She died this January and at San Diego her husband and two trial lawyer sons  were with us attending a legal meeting where she was to be remembered. Lita gave a beautiful memory of her relationship with Bobbe and I'm reprinting it below.

This is a part of the newspaper obituary:  Barbara Schlesinger , 82, of Golden Beach, passed away January 18, 2015 surrounded by her family. Beloved wife and mother, Barbara, known to all as Bobbie, was originally from Chelsea, MA and was the daughter of Al and Tessie Butler. She came to South Florida to attend the University of Miami where she graduated in 1954. Throughout her life, she was active in charitable work, notably hosting the Race for Life charity events for many years. She wrote a social column in local newspapers -She is survived by her husband of 60 years, Sheldon; her sons: Scott and Gregg; her six grandchildren: Charlotte, Alexander, Molly, Theodora, Samuel, and Theodore.- See more at:  http://www.legacy.com/obituaries/sunsentinel/obituary.aspxpid=173908009#sthash.ET4ObL0S.dpuf

This is what Lita said to the crowd that gathered in Bobbe's honor:

The year was 1980, 35 years ago, at the Green Brier in West Virginia when I first met Bobbe. It was our first Inner Circle meeting and I was nervous and unsure of what to expect. We walked into the opening night reception… and there she was.   I remember exactly what she had on.   Yes, it was Black and white with a large Fuchsia scarf draped around her regal petite frame.  Her thick naturally curly black hair was pulled back into her tight signature bun.  And As Bobbe always did at ever social function, she owned the room. Like everyone else, I was drawn to her like a moth to a flame and I 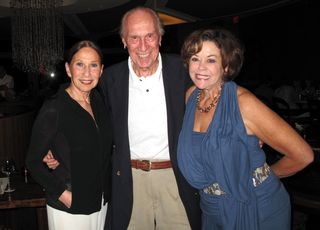 We traveled several times together to health centers, not fluffy Spas… Bobbe was serious about her health because both her parents passed away in their 60’s.  She liked going to Old Pritikin Longevity Center when they were located in Santa Monica.  I hated the food, and I hated the exercise, but I loved Bobbe.  One night she asked me to join her with a few Quote “old pals” she was inviting in to have dinner. I said “are you kidding me?  You are inviting people to this place where the food is bland and terrible and there is no Alcohol, and the napkins are paper…. And the tabletops have cracked Formica?? She winked at me and said.. You might want to ditch the yoga pants tonight and put a little make-up on… Little did I know that her few “old pals” would be Old Hollywood stars?  I walked into the tired old Pritikin dining room and there was Bob and Doris Hope, Tim Conway, A  then well-known TV  comedian on the Carol Burnett show , Dom Deliouise, and  Steve Allen, the  TV talk show Pioneer and his gorgeous silent screen movie star wife,  .  Bobbe had a beautiful table draped in linen, slip covers on the folding chairs and a gorgeous flower arrangement on the table..  They all came to this old austere basement cafeteria to Join Bobbe Schessinger.  The comedians were feeding off each other and Bobbe was right in the mix, beguiling them all. She was the most gracious Hostess in the world. Some people search for beautiful places to go.  Bobbe just made everywhere she went beautiful.  It was one of her many gifts.

During that trip she got a phone call that her first grandchild, Charlotte, was born early.  She was bursting with excitement and pride at being a grandmother. That day she made plans to return to Florida but not before we went on a Nursery and baby shopping spree on Melrose that was dizzy and dazzling.  We talked to Shelly at the end of the day and he said “God I wish someone would steal Bobbe’s purse.  No one can spend as much money as she can.”  While I might agree with him, she was usually spending it on someone else and I decided that day in my next life I wanted to come back as Bobbe’s grandchild.

But For this lifetime I have been blessed to have her as a Dear Friend.  The hat I am wearing is one she sent me after I saw her wearing it at an Inner Circle meeting in Florida.  I told her I loved it on her and when I got home from the meeting there it was, waiting at my door with one of her signature hand written notes on her beautiful engraved stationary.  The Note said “Wear it, have fun.. And Think of me”   That gift and note are quintessentially Bobbe.  Let’s raise a toast to the magnificent Bobbe Schlessinger. Here’s to Bobbe who made every day count.

And everyone one she touched feel special.

I know one thing for Sure, On January 18th, 2015 God got a really good one. As much as we will all miss her, there must be lot of celebrating and laughter going on in Heaven.