I am going to violate the well-established wisdom of never talking to others about religion or politics because it causes controversy. I'm going  to talk about both. The reason is because I think the clerk in Rowan County Kentucky  where the county clerk, Kim Davis, refuses to issue marriage licenses to same-sex couples because she has religious objections is misguided I am offended, as one trained  in law, that this is being defended as a religious  faith issue when it is not. That's because of her public office position which results in her claim of religious conviction being in total conflict with her sworn duties of office the elected County Clerk. Given her refusal to perform her sworn duties of office,  she should either resign or be removed from office like anyone else who refuses to perform the duties of office for which 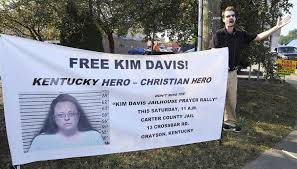 Her actions violate her oath of office. When she ran and was elected to the position of County Clerk she took an oath which in part provided:

The duties of office include receiving application for marriage certificates and issuing such certificates. Last June the United States Supreme Court in Obergefell vs Hodges held that states must issue marriage licenses to couples without regard to their sexual orientation. That ruling directly applies to Kim Davis and every other public official charged with issuing marriage certificates. Public officials don't have an option in that regard nor do they have a right to refuse to obey for religious reasons because they are not private citizens, but holders of public office. She receives an annual salary of $79,796.68 and  so long as she continues to accept her pay, which she has been collecting, by remaining in office,  she is obligated to follow the law of the land whether she likes it or not because she is a public official and not acting as a private citizen. Neither she nor any other public official have the right to take taxpayer's money and refuse to do their elected job no matter what their personal beliefs.

The issue is not her personal religious beliefs. She has the right like everybody else to those beliefs. The issue is whether a public official can refuse to carry out the specific duties of their job to which they  were elected, while staying in office and collecting their salary? Government is constitutionally obligated to treat all citizens equally under the law. Davis is obligated to  comply with the United States Supreme Court, in the same way County clerks who objected to marriage between people of different races on religious grounds were obligated to issue licenses for such marriage after the court concluded that the bands against doing so were unconstitutional. If she cannot in her good conscience issue marriage licenses to gay couples, then she's not able to carry out the duties of her office and she is not entitled to the salary she continues to collect. She therefore should resign or be removed from office.

The protestors are wrong. The issue is not the right to exercise freedom of religion. There is no constitutional right on religious grounds to refuse  to carry out the oath of office by an  elected official as there would be as a private citizen. She has the right to her personal religious views. What she doesn't have the  right, under the constitution nor the claim of religious freedom is to violate her oath of office by refusing to carry out her public, sworn, duties while not resigning and while collecting her salary. It is unlawful and morally wrong to collect money for what you were paid to do as a public official while refusing  to do your official duties. She should resign or be removed from office. To do otherwise is a violation of oath of  office and illegally taking taxpayer money she is not entitled to receive.