Stephen Spielberg's movie, Bridge of Spies, is based upon a true historical event. During the cold war the United States conducted high altitude flights over Russia photographing areas of military interest. The movie involves the facts about an airplane, a U –2 spy plane flown by pilot Francis Powers and which was shot down by a Russian missile. Powers survived and was captured by the Russians. Powers eventually was exchanged for a captured Russian spy held in a United States prison.

The Russian spy, working in New York,  went under the name Rudolph Abel but had been born William Fisher in 1903 in England. His parents were sympathetic to the communist philosophy and in 1948 Fisher 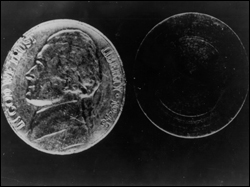 entered the US illegally by way of Canada to spy for the Russians.The facts about how he was captured are unique. the FBI has posted the story on their website. https://www.fbi.gov/about-us/history/famous-cases/hollow-nickel

His capture involves  true facts about a "hollow nickel" and a newspaper delivery boy, Jimmy. According to the FBI, on the evening of Monday, June 22, 1953 jimmy, a delivery boy for the newspaper Brooklyn Eagle,  knocked on the door of one of his customers in an apartment building to collect for the paper. The customer told him that she was sorry but did not have change. So, he went across the hall to see if he could get the change needed from the neighbor and was able to do so.

After leaving, he was carrying coins in his hand and and noticed that a nickel had a funny ring when striking the other coins. To test it he dropped the coin on the floor and to his amazement it fell in half. Inside he found a tiny photograph, apparently a picture with numbers on it. It turned out to have been a spy coin which had accidently somehow been spent as a real coin and ended up with this newspaper delivery boy.

Jimmy told his dad and his dad told the police but nothing was done. However, several days later a detective from the police department was talking to an FBI agent  about another case and mentioned the hollow nickel  he had heard about being reported. The FBI was interested and asked for the coin. When the FBI  sent the coin to their lab where they examined the micro photograph and found it had 10 columns of typewritten numbers. While the laboratory tried to decipher the message, the FBI began an investigation to find its source. They contacted the people across the hall who had helped the newspaper boy get change and tried to trace  it but were unsuccessful.

For the next four years the FBI was unsuccessful in either deciphering the information or determining the source of the coin. However, in May 1957 a Soviet security officer named Hayanen defected to the United States and agreed to cooperate regarding his activities in the United States. He was able to identify Abel  as someone he had interacted with while acting as a spy for Russia. When the FBI arrested Abel they found in his room espionage equipment including shortwave radios, cipher pads, cameras and numerous other spy paraphernalia. He was arrested and tried as a spy. He was convicted on all counts and sentenced to prison. While he appealed his conviction it was upheld by the United States Supreme Court.

On February 10, 1962 Abel was exchanged for the American U-2 pilot Francis Gary Powers. Abel was  treated like a hero on his return to Russia. Later, however, he was forced into retirement by the spy agency he worked with and died of lung  cancer  in 1971.

What is amazing is that this unusual story started with a hollow nickel discovered by a newspaper delivery boy. Sometimes truth is stranger than fiction.