Famous trial lawyer Clarence Darrow once said: "I never wanted to see anybody die, but there are a few obituary notices I have read with pleasure." I confess that was my first thought when I learned of the death of U.S. Supreme Court Justice Scalia.  Or, as the comedian George Jessel once said about the people attending the funeral of a celebrity he didn't like: "you see, give the people what they want and they will come." From my perspective here was a man, Antonin  Scalia, who was a traitor to his heritage. Someone who abandoned the gifts of immigrating parents and aliened himself with the rich and powerful. He was the child of Salvador and Catherine Scalia. His father had immigrated from Sicily as a teenager through Ellis Island. His mother was a first-generation Italian American. Yet he was totally aligned with the rich and the powerful in his judicial opinions and his personal life. He was born in 1936 in New Jersey and 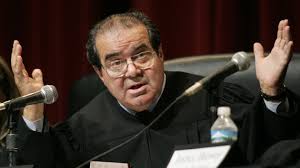 became a practicing lawyer in the 1960s. He worked in public service in the 70s with roles as President Nixon's general counsel as an assistant attorney general. In the 80s he became part of Pres. Ronald Reagan's court of appeals and in 1986 Reagan nominated him as an associate justice of the US Supreme Court. it's true I would probably be classified as a "yellow dog Democrat – one who would sooner vote for a yellow  dog before they would vote for any Republican - but, I am also the son of an Italian immigrant and a Croatian immigrant mother and as such  I cannot understand how someone with his immigrant background could be so completed aligned in his judicial bias for the rich and powerful.

In addition to his clear bias, his judicial conduct was shameful especially regarding his ignoring clear conflicts of interest. Supreme Court justices are entrusted with the responsibility to exercise the highest degree of discretion and impartiality when deciding the case. They are obligated according to the federal judicial disqualification statute 28 USC 455, which applies to all federal judges, including the Supreme Court justices, to disqualify themselves in any proceeding in which their impartiality might be reasonably questioned. Neither Justice Scalia nor Justice Thomas ever acknowledged this duty of avoiding apparent conflicts of interest by sitting on cases that were inappropriate for them. When the Supreme Court heard arguments in a case involving  vice president Dick Cheney  Justice Scalia was expected to disqualify himself since they were friends and had just recently spent time with Mr. Cheney hunting and spending social time together. But, Scalia rejected any possible conflicts saying: "I do not believe my impartiality can reasonably be questioned" and voted in favor of Cheney. But the case of Bush v Gore  is a better example where he exercised an unrestrained political agenda ensuring George Bush became president. He was unrepentant regarding this act of judicial bias and when later questioned told the reporter "Get  over  it."

Amazingly, justice Scalia had no hesitancy in participating in the court case of clear conflict of interest for him involving a case where anti-abortion advocates claimed a Massachusetts law creating a buffer zone around abortion clinics violated the First Amendment. He voted with the majority in favor of the anti abortion advocates even though his wife had been on the board of a pro-life organization and served on a national board as well as acting as a crisis counselor to pregnant women at that time. In addition, Scalia ( and Thomas) accepted free trips and vacation offers from  billionaires and multimillionaires while not hesitating to sit on cases that directly affected this group of powerful people. When  Charles Koch of the infamous Coke brothers invited  Scalia to a political retreat in palm springs Scalia the invitation. Yet the Koch brothers were the main beneficiaries of the infamous Citizens United case which removed restrictions  of contributions by the rich to political causes. In fact Justice Scalia, at the time of his death, was at the Chibola Creek Ranch, a luxury 33 room resort with a private airstrip at the invitation of John Poindexter a Houston born multimillionaire. He professed to see no appearance or actual conflict of interests in his attendance and speeches to conservative think tanks and other right wing groups.

His arrogance and bullying sarcasm and verbal attacks on attorneys arguing to the court bordered on cruelty. They were not totally unlike the same verbal comments being made by Donald Trump. His allies suggest that we should have ignored it and shrugged our shoulders  because: "well, cut the guy some slack, you know how moody geniuses are." His rudeness towards counsel appearing before the court and his mocking of them is well-known. In one case a nervous lawyer, making his first appearance before the court, had just begun addressing the court and proceeded a few minutes when Scalia interrupted with: "counsel, you are not reading this are you?" The mocking putdown  was embarrassing to the lawyer and unnecessary. When a reporter at a public appearance questioned Scalia about whether his religious views were dictating his decisions, Scalia's response was: "to my critics, I say vaffanculo, flicking his right hand under his chin.  In Italian culture this is a crude way of saying "F…..you."  When a student in Florida at a gathering politely asked about why there was a ban of photos and video in the court scalia responded "that's a nasty, impolite question" and refused to answer it.

His personal attacks on his fellow justices in dissenting opinions is also well-established. In Obergefell v Hodges  he wrote: "The majority opinion is couched in a style that is as pretentious as its content is egotistic." There are any number of  other personal attacks and sarcasm towards those who did not agree with him that he inserted in his opinions. I agree with those who have said they respect his right to differ with the majority of the court but not his mean-spirited insults of his colleagues and the litigants nor of his belief that the world will end as a result of the majority decision he disagrees with nor with his obvious hatred of civil liberties. His comment during oral argument in the Michigan cases about diversity and the law school were correctly interpreted as being racist. As others have noted is tone and language was totally inappropriate for an attorney or a judge. His resort to personal attack, hyperbole and insults directed at his colleagues and litigants was  unjudicial and shameful.

Elaine Cassel practices law in Virginia as well as teaching law and psychology. In a blog she wrote pointed out that Scalia dropped his membership in the American Bar Association in the 1980s when it took a position against gay discrimination. She notes that Scalia was clearly infuriated by the majority opinions in the Michigan and sodomy cases. She says that his angry outburst indicate a deep  seated  pathology that made him unfit to  be on the bench at all. I agree. This was a Justice who decided he was above the law. That he could say and do whatever he wanted without any fear of reprisal. He was determined to impose his religious and moral views as being the only right ones on everyone else through his opinions. The idea of impartiality of a judge or the unconstitutionality of legislating morality through judicial decisions never made him hesitate in exercising a personal agenda on everyone  else through his decisions. In my view, he was a clear illustration of what has  become wrong with the judicial system. Appointments to the federal and state bench, especially the U.S. Supreme  court, are made for political reasons and not because of the best qualifications to serve. The impartial judiciary has become the same political arena as the legislature. Instead of a balance of power they have become part of a legislative body, something the constitutional creators  were trying to avoid by creating three independent bodies. Thanks to Citizens United and the super rich the system is limping towards failure. Now the Republican senate will stall and block any appointment by the president putting the judiciary even more into the political arena where it should never be.