Lita and I flew to Scottsdale on Monday for some sun and relaxation at our home in Scottsdale. It isn't just a move from Northwest weather to sunny Arizona weather, it is a move from one culture to another. I don't know where to start in explaining what I mean, but let's start with politics for example. 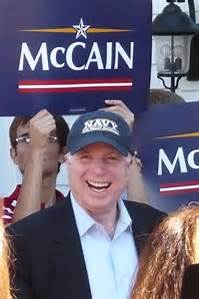 Eighty year old Senator John McCain, first elected to the Senate in 1986, is running again for reelection to the United States Senate. It's impossible to forget that this is the same man who thought it would be a good idea to select Sarah Palin as his running mate. That was followed by the reversal on many of the principles for which he had stood in order to be elected to the presidency. Consistent with his moral compass losing it's direction, this time Senator McCain has endorsed Donald Trump over 60 separate times. He has predicted and warned about a "broken government" if Trump doesn't win. However, recently Hillary has gained more support in Arizona and Trump has lost more Republican support. As a result Senator McCain has held his political forefinger to the political wind and now has suddenly reversed political course by deciding on the eve of election to withdraw his endorsement, or I should say multiple endorsements, of Donald Trump. Welcome to Republican politics in Arizona.

But,who can forget Arizona's former governor Jan Brewer, who like a political zombie, has risen once again in Arizona politics even though not in office. Of course it will not come as a surprise to anyone that the former governor has strongly endorsed Donald Trump and defended him against claims that he is a sexist and a bigot. She, like Trump, blames President Obama for all of the ills of the world while insisting that Trump will solve them. Her record while governor was one of blatant discrimination against minorities and particularly Hispanics. Her extreme conservative actions while governor were only exceeded by the illogical arguments she made  for doing it. As evidence of the fact that she has clung on to all of her bigotry, when she was recently asked about the impact of Hispanic votes in Arizona in this election, she dismissed it with 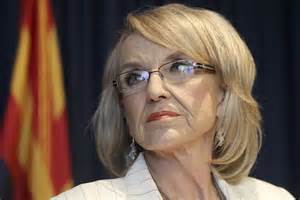 But, wait, there's more. No report about Arizona would be complete if it did not include a report about 84 year old Sheriff Joe Arpaio who takes pride in calling himself "America's toughest Sheriff." His record of service while in office more correctly identifies him as "America's most bigoted sheriff." He's running for reelection again. This Republican was first elected in 1993 and has been reelected year after year  in spite of all of the evidence to the contrary. Only in Arizona would a man be repeatedly reelected Sheriff when his abuse of civil rights has cost taxpayers to date over  $142 million taxpayer dollars in lawsuits and settlements. His deliberate discrimination against Hispanics resulted in successful Justice Department intervention in Arizona. On top of that the good Sheriff, running to be reelected, has
been criminally charged with criminal conduct. While the state judges have been intimidated by Arpaio's political power, the good Sheriff met his match in U.S. District Court Judge Murray Snow who held a hearing and determined Arpairo deliberately violated court orders regarding discrimination against Hispanics. Under oath the good sheriff was forced to admit his deliberate

ignoring of orders against any more racial profiling. Arpaio in his political ads claims that the criminal proceedings were part of the Obama administrations attempt to stop the Sheriff's immigration enforcement efforts. Since this is Arizona he's likely to be reelected again.

So, these are the Republican leaders of this very red state who love the idea of Donald's wall and want to keep the state white and crime free by ignoring the US Constitution. They also embrace a ban on same sex marriage, abortion and anything on their Republican list of "Christian" beliefs. If you are white, are a fundamentalist Christian and "straight" you'll love it here politically.

And continuing with Arizona politics, Hillary has been running ads regularly on television. One of the more effective ads involves a man who had been employed in a missile launch site where he had the authority to release nuclear missiles on order from higher authority. While talking inside the facility,with the various controls behind him, he effectively expresses his great concern  to put Donald Trump in charge of missile launching. Local polls show Hillary within striking distance of Trump. One can only hope.

Another iconic feature of Arizona is the driving characteristics of the people on the road. Putting it in the best light, one would describe it as "aggressive" driving. There are lots of accidents. Many are due to the compulsion of Arizona drivers to get as close to the rear bumper of your car as they can while traveling at freeway speeds. Keep in mind also, that for Arizona drivers stop signs are only a suggestion and never a requirement. As to traffic lights, Arizona drivers have a problem of being color blind. For them, yellow lights seem to stay yellow even after people with normal vision see that the light has turned red. As a result, expect cars to continue through the change from yellow to red. At intersections, you take your life in your hands. Out-of-state drivers also have to learn to be eternally vigilant in parking lots especially in mall areas. That's because neither pedestrians nor drivers will stop when you are in the process of backing out of a parking place. No, in spite of your moving cars, pedestrians keep walking right behind your backing vehicle. Worse, cars will continue to drive ahead instead of stopping, even when you are two thirds of the way backed out if they think they can speed by forcing you to slam on your brakes.

I'll give you what would be considered a "near-death" example anywhere but Arizona but which is simply an every day driving occurrences here. Yesterday I was slowly backing out in the parking lot at the grocery store. Suddenly a woman stepped directly behind my moving car. I avoided running over her only because I was moving so slow. She had to put her hand on the back of my car to prevent from being knocked over. She never looked back at me as she hurried into the store and I was too shook to roll down my window to ask "what the hell just happened?" I can only assume that she had decided that I was moving too slow so she decided to just walk behind the car or maybe to simply force me to stop so she could hurry into the store.

Lastly, the Arizona Cardinals managed to confine the Seattle Seahawks to a  6-6 overtime tie game. Clearly, that to was part of the Arizona other  world conduct to which I object. I thought I'd add that to my list of complaints about Arizona strangeness. But, the weather is  great and the beauty of Arizona striking, so we will continue to come back.