I was born eight two years ago today, on Thursday, February 21, 1935, the youngest child of my parents Paul and Mary Luvera. My sister Phyllis was the oldest and Anita was the middle child. I was born at the small hospital in Anacortes, Washington. In dad's book, An italian Immigrant's Journey, he says he had a bet with his friend Rex Stevenson that the baby (me) would be a boy and Rex said it would be a girl. The loser had to take a public bath in front of the Empire theater building in downtown Anacortes. Since Rex lost the newspaper announced the loser would take the bath. There is a picture in his book of Rex taking a bath with hundreds of people in attendance.

Dad was so excited that he had a son, he writes that he prepared an announcement card which in part described me as an automobile:

He writes that he distributed hundreds of these and I was told he even had them dropped from an airplane. I was named after my grandfather Paul Nicholas Luvera.

While it has been said that "old age and treachery will triumph over youth and skill" I think the more accurate observation about old age was by James Thurber who wrote: "Old age is the most unexpected of all things that can happen to a man." How I got to this age so quickly eludes me yet. I remember so clearly playing on the Anacortes Seahawk basketball and  football teams, purse seining in Alaska for salmon and going to night law school as fresh as if it were yesterday. What old age brings with it is not always a gift. A friend of mine sent me an article about a man who turned  eighty. This is what he said in one part of the article:

"In our twenties, at lunches, my male friends and I talked a fair amount about sports and sex; in our thirties and forties and fifties, food and movies and politics were the main subjects. Since our seventies, health has taken over as topic number one. Sleep is a big item: No one seems to sleep through the night without having to get up two or three or more times. The fortunate ones among us are those who can get back to sleep. The old brutish masculine question of our twenties—"Getting much?"—now refers not to sex but to sleep.” But, Cat in the Hat says it best: 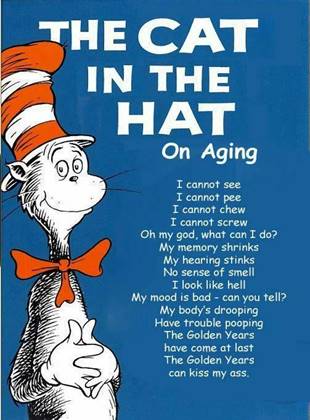 Here are some of my favorite observations about aging:

Life's journey is not to arrive at the grave safely, in a well preserved body, but rather to skid in sideways, totally worn out, shouting "Holy Shit, what a ride!"

John Mortimer, the creator of "Rumpole" died in January at age 85. He wrote about the indignities of dying: "Dying is a matter of slap-stick and pratfalls. The aging process is not gradual or gentle. It rushes up, pushes you over and runs off laughing. No one should grow old who isn't ready to appear ridiculous."

It was said of Thomas Jefferson that "he grew old learning new things."

This does cover the significant facts of being my age. I am thankful for a long life in giving me time to learn some wisdom, do  some good for others and spend my life with Lita. I have been blessed in many ways and am thankful for each day given to me. God has blessed me  in so many ways.