Republicans have managed to transform the constitutional tradition of the United States Supreme Court from an independent, non-political branch of government into a political one. In one of most notorious unprecedented and significant political acts in court history, the court decided the election of the president of the United States in Bush v Gore 531 U.S. 98 (2000) by a 5 to 4 vote. The conflict about the proper role of the court continues today and every time a  new justice is appointed  to the court. President Trump has the opportunity to totally change the makeup and function of the court from its constitutional intent into a even more blatant political body through additional appointments. 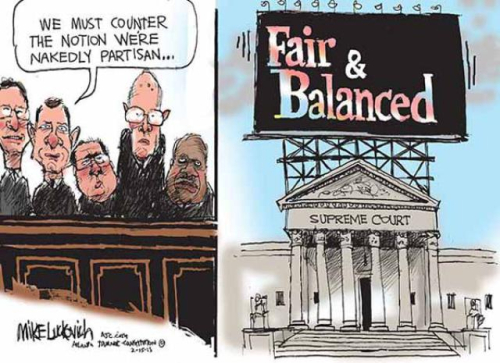 What was the original intent of the court? The Supreme Court of the United States was established in 1789 under article 3 of the United States Constitution. It is the highest federal court in the country, over all federal courts and state court cases involving federal law. The Constitution does not indicate the number of justices but since 1869 Congress has established the number of judges serving on the court to nine. Political attempts to change the number of judges have been unsuccessful. The most notorious was in 1937 when Pres. Franklin D Roosevelt tried to increase the court to 15 judges but was rejected by Congress as a "court packing plan." The Constitution does not set a time for serving on the court but simply says that justices "shall hold their offices during good behavior." That has been interpreted as an appointment for life unless impeached, resign or retire. No justice has ever been removed from office by impeachment and attempts at impeaching William O Douglas in 1953 and 1970 were unsuccessful. Justice Abe Fortis however, resigned when impeachment hearings were being organized by Congress in 1969. There is no constitutional provision for removing a judge who is unable or unwilling to serve due to illness or injury.

The traditional description of the branches of the federal government are: (1) the legislature responsible for enacting laws and appropriating money to operate government  (2) the executive branch responsible for administrating public policy enacted plus funded by the legislature and (3) the judicial branch responsible for interpreting the laws and the Constitution.This division is often referred to as the "separation of powers." It was intended to provide a system of shared power known as "checks and balances." The original intent was to keep the three branches separated and totally independent in response to all power centered in a single person like the king of England at the time. This division of individual judgment and power was believed to be a fundamental requirement to the preservation of liberty. Madison wrote: "the accumulation of all powers, legislative, executive and judiciary, in the same hands, whether of one, a few or many may justly be pronounced as the very definition of tyranny." Under the constitution the president nominates members of the court who are then subject to confirmation by the Senate. The executive and legislative offices are elected and political, but the court is appointed and intended to be non-political.

In more modern times Justice Hugo Black and the late Justice Scalia shared very similar views about judicial interpretation. They both believed in the "sanctity" of the written constitution and that any other interpretation was a serious  threat to democratic government. On the other hand, Earl Warren,who served from 1953 to 1969 and William O. Douglas, who served from 1939 to 1975 would  be on the opposite side of that idea. Douglas is known for his tormenting of fellow justice Felix Frankfurter who believed in "judicial restraint" for his conservative views. For example, he would wait until Frankfurter had expressed his opinion and views at the judges conference on pending cases and then announce: "I had been prepared to vote as Felix had recommended until I heard his reasons. Now, I've changed my mind." Internal  conflicts  and controversy among the members has always existed. The difference today is that they are now often about political issues rather than judicial. This isn't going to change until appointments to the court are primarily based upon judicial qualifications and not political ones.

Maybe Jay Leno was right: "The Supreme Court has ruled they cannot have a nativity scene in Washington D.C. This wasn't for any religious reasons. They couldn't find three wise men and a virgin."