LaDainian Tramayne Tomlinson is a former professional American football player who was a running back in the National Football League for eleven seasons. He played the majority of his 11-year career with the San Diego Chargers, who selected him with the fifth overall pick in the 2001 NFL Draft. Tomlinson was selected to five Pro Bowls, was an All-Pro six times, and won two rushing titles. At the time of his retirement, he ranked fifth in career rushing yards, seventh in all-purpose yards, second in career rushing 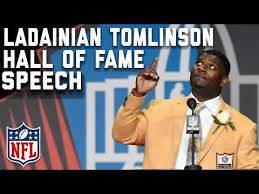 I read his speech and I thought it was inspirational. Here's what he said:

"My name began with the man who owned my great-great-great grandfather. Now it’s proudly carried by me, my children, my extended family. People stop me on the street because they know me as L.T. the football player, but after football, people have begun to recognize me as LaDanian Tomlinson, not simply for what I did as a football player but for who I am as a man. The family legacy that began in such a cruel way has given birth to generations of successful, caring Tomlinsons." "I firmly believe that God chose me to help bring two races together under one last name: Tomlinson. I’m of mixed race, and I represent America. My story is America’s story. All our ancestors, unless we’re American Indian, came from another country, another culture. Football is a microcosm of America. All races, religions and creeds living, playing, competing side by side." "America is the land of opportunity. Let's not slam the door on those who look or sound different from us. Rather, let's open it wide for those who believe in themselves. … I'm being inducted into the Hall of Fame because my athletic ability created an opportunity for me to excel in the sport I love. When we open the door for others to compete, we fulfill the promise of one under, under God, with liberty and justice for all." "On America’s team, let’s not choose to be against one another. Let’s choose to be for one another. My great-great-great grandfather had no choice. We have one. I pray we dedicate ourselves to be the best team we can be, working and living together, representing the highest ideals of mankind, leading the way for all nations to follow." "One of the most eloquent orators of all time said it best in his farewell address. Paraphrasing and humbly building upon what President Obama said, we all have to try harder, show up, dive in and stay at it. I am asking you to believe in your ability to bring about change. To hold fast in the idea whispered by slaves. 'Yes, we can.' "