As a retired trial lawyer who spent the majority of his adult life studying communication skills, I was curious to view the response by Representative Kennedy to the president's state of the union address. He has been viewed as as new rising political star. His family background involves some of the most dynamic and charismatic political leaders of our time. As a dedicated democrat, I was interested in his speaking skills given the need for great, young candidates in our party.  I wasn't focused on the substance of what he said primarily. I was focused on the evaluation of his overall delivery and persuasive skills. I was disappointed.

Here is the impression of columnist Kyle Smith: 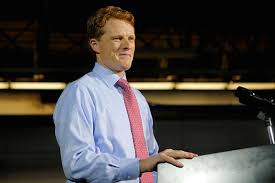 "I’d never watched Joe Kennedy III before. Apparently a couple of his speeches have gone viral, and the Democrats thought he was just the rising star they needed to respond to Trump’s first State of the Union.

Oh dear. Oh dear oh dear oh dear. No. Ginger Baby Kennedy looks like the most boring nerd in middle school, and he spoke as if he were running for Student Council president. He had moisture at the corners of his mouth. He seemed nervous. He was emotional to the point where he seemed like he might start to cry. He spoke what I’m told is terrible Spanish in an effort to be ingratiating. As my pal Joe Simonson of The Daily Caller pointed out on Twitter, a Kennedy is not the person to make the case against elites sucking up all the wealth, nor is he the one to align himself with sexually mistreated women under the #MeToo rubric. Kennedy seemed like the kid who gets jammed into a locker in a high-school comedy — and the crowd laughs with the bullies who do this to him. America is not a nerd-loving nation. Go ask Mike Dukakis about that. Moreover, his weepy downer of a speech was way too pessimistic. This isn’t 1932."

My evaluation of his demeanor, the speech location and delivery is somewhat in agreement. Here are the factors I noted as one analyzing those facts and not the substance of his message:

1.    Poor location. I understand the intention to show identification with ordinary people, but the car in the auto repair room with the hood up and the school flag hanging from the wall was a continual distraction. That's why video operators look for blank backgrounds or ones that don't distract from the speaker.

2.    Wrong audience. The audience was loaded with a lot of young and enthusiastic people who applauded virtually everything he said. While you don't want an audience of hostile people, you do what one that is controlled enough in their support to let you give your talk without continual interruption of applause.

3.    Poor audience control. As a speaker, you need to be able to finish your points completely for full impact. When you have a problem of an audience over enthusiasm, good speakers control it by their non verbal communications. Bill Clinton was a master at putting both hands up and signaling he wanted them to wait so he could finish what he was saying. He and other speakers control audience reaction by these techniques. Kennedy made no attempt to do so and was  interrupted over and over so that the context was often lost.

4.    Failure to capitalize on first impression opportunity. When one begins a talk everyone is paying attention. There is a golden period of less than a minute or two to grab their attention with a strong opening. Doing that ensures the audience continuing to listen. Wasting that opportunity by thanking people or bland remarks violates basic rules of good communication. Kennedy wasted his opportunity. In addition, he allowed too much initial applause before he began his talk which is also a wasted opportunity of the initial audience attention.

5.    Personal appearance distraction. Unfortunately, he had a shiny substance on  each side of his lips which reflected light and was distracting. He later said it was lip balm, but someone should have checked his overall appearance before he spoke because people were all curious afterwards what it was. You don't want your audience concentrating on anything other that what you are saying to them. I would have also given some thought to whether this should have been a shirt sleeves talk or one with a coat and tie. It's supposed to be a response to the president's state of the union. Perhaps a more formal appearance would have communicated more authority and leadership qualities.

6.    Distracting cadence, timing and inflection. His delivery was a "stuttering" stop, pause and go, like delivery. I thought that perhaps he was modeling Barrack Obama style badly. I wondered if he had memorized his talk in short sections which caused this delivery. As a result, there was a failure to have a flow of a complete thought with an appropriate pause for dramatic impact. At times, it was as if he had a speech impediment. It was delivered like there had been a failure to insert any punctuation at all in his speech. There was no Obama like rise and fall of inflection for dramatic points. Towards the end of the talk, he did do a much better job in that regard, but, for me, it was disappointing to listen for the majority of the talk.

7.    Poor format. The only content I was interested in was the organization and style of the words used. I felt he failed to use the most basic communication and persuasion device which is a story. Great speeches are stories. Otherwise the speech is often nothing more than words which have little emotional or logical appeal. His format too often lacked good story format and when it did, it was a noticeable improvement. In addition, I felt the content, for the most part, failed to address the claims made in the state of the union. I believe the purpose of the response is intended to be a rebuttal to the state of the union. This talk, however, was, for the most part, a rally cry for the democratic party. Instead, it needed to be focused on what had been said by president Trump

8.    Too long. This turned out to be the third longest response to a state of the union since they have been given. For me, it was clearly too long.  Rebuttal's are best given as short, powerful reasons for rejection of the previous claims. Instead, it was too often much like a lengthy democratic state of the union talk without connection to the state of the union.

In 2004, Barrack Obama gave the keynote address to the Democratic National Convention on the second night in late afternoon. He was unhappy with the time slot because he didn't think there would be television coverage. He was a first time Senator who had been elected only a few months before. His talk lasted merely twenty minutes. That talk was so well received that it is accepted as the primary reason he was able to secure the presidential nomination and be elected as president. If Kennedy supporters had hoped for a similar outcome this talk, I think they will be disappointed. For a first talk to a national audience Kennedy failed to make a good impression. On the other hand, he has all the family history, good looks of a kennedy plus the right voting record. He has lots of time to make up for one bump in the road of impression.