The Archdiocese of Seattle publishes Northwest Catholic magazine. In its last issue was an article entitled Humane Vitae Turns 50 by Sarah Bartel (www. drsararhbartel.com) she has a doctorate in moral theology and ethics from the Catholic University of America where she specialized in marriage, family, sexual ethics and bioethics

The Encyclical she refers to is the one issued by Pope Paul VI in July of 1968 reaffirming the ban against using contraceptives by married couples. She begins the article with “why I’m grateful for the much-maligned Papal encyclical on sexuality and marriage.” She writes in theological praise of the ban and asserts its moral validity. Not only does she praise natural family planning and condemn “artificial” contraception but adds the claim that the Pope was a prophet in predicting what would happen if artificial birth control was widely accepted. She makes the unsupported claim that the primary cause of all these moral evils is the result of the use of contraceptives:

1    An increase of marital infidelity

3   Governments using the coercive power of the state to impose contraception on people.

This exaggerated assertion and the unrestrained approval of the ban by the author of the article flies in the face of fifty years of human experience demonstrating it's cultural failure among Church members and the rejection of it's moral justification by respected Catholic theologians. It also ignores the questionable background behind the issuance of the Encyclical.

What is the true history of the Encyclical which renewed the ban, now fifty years old? The original condemnation for the use of condoms and contraceptive means 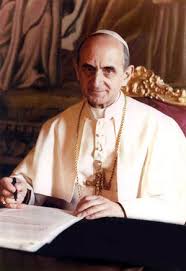 was renewed by Pope Pius XI in 1936. He issued the ban against all artificial forms of birth control in response to the Anglican church allowing its married members to decide the issue for themselves.

The issue was included in the agenda for the Second Vatican Council held from 1962 to 1965 and convened by Pope John XXIII. However, John did not live to see the completion of the counsel’s work. After his death, the new Pope Paul VI, concerned by the direction of discussions on the issue, removed birth control off the agenda for discussion. Instead, he announced he was creating a pontifical commission to advise him on a final decision he would make. In 1966 the his appointed commission delivered its final report to the Pope in secrecy. Two years later the Pope issued his Humanae Vitae Encyclical banning all forms of contraceptives and approving only “natural” birth control. In its simplest explanation, natural family planning is any of the methods by which married couples can determine when the wife is potentially fertile, so that they can practice periodic abstinence if they don’t want a pregnancy.

The Encyclical resulted in an immediate general loss of credibility among the faithful with Catholic parishioners leaving the church. Today polls indicate that more than 90% of Roman Catholics who are attending church simply ignore the decree.

What did the commission find and recommend to the Pope before he issued his universal ban? The commission’s work was wrapped in a Vatican blanket of secrecy, but the final documents were leaked to the press. The documents received wide publicity and fueled the firestorm that greeted the pope’s decision. That’s because the Pope’s commission had voted overwhelmingly for a change of position. There were fifty-eight experts on the commission: clergy and laity, scientists, theologians, gynecologist, sociologist married couples and other scholars. They voted 52 to 24 in favor of a reform of the ban. This, despite the fact the Pope loaded the commission with fifteen cardinals, archbishops and bishops as official members for the final week of discussion. The high-level prelates voted ninety-three, with three abstentions, with the Commission that the use of contraceptives was not intrinsically evil. The Commission’s final report asked the holy father to take a holistic approach to marriage as “responsible parenthood” Instead, the Pope rejected the findings and recommendations of his Commission and issued a blanket renewal of the ban.

I’m not a theologian. However, a significant number of Catholic theologians and scholars uniformly disagree with idea of intrinsic evil regarding contraceptive use in marriage outlined in the Encyclical and supported by Dr. Bartel. The fundamental dilemma facing those who try to morally justify the Encyclical ban is best illustrated by the conflict of “intended purpose “involved in a choice between “natural” birth control and a contraceptive pill. There are acts which are intrinsically wrong and cannot be morally justified by any ulterior motive. Conversely an act that is not intrinsically morally wrong may be morally wrong if done for an improper purpose. The intended purpose is the determining issue. However, moral scholars and theologians have pointed out that the use of the pill by married woman with the intent of preventing pregnancy is not intrinsically evil and does not fall into either of these categories. The intention of reducing the frequency or number of pregnancies is recognized by the Encyclical as legitimate and appropriate. Therefore, in the Encyclical we have a condemnation of an act as morally wrong that is not intrinsically wrong. It becomes wrong when it is done for a purpose which is morally wrong. When we compare abstinence and contraceptive practice in marriage,  it is undisputed  both involve a couple who have decided to try to avoid pregnancy. The intended purpose of “natural” birth control and the use of the pill are identical: to prevent pregnancy. Yet one is condemned as evil and the other said to be morally approved even though the intended purpose is the same.

The Northwest Catholic article by Dr. Bartel even cites a new method of “natural” birth control which she says has: “A 99.6% effectiveness rate for avoiding pregnancy." She says it is morally appropriate even though It promotes a method with almost 100% effectiveness in preventing pregnancy. The pill has essentially the same rate of effective success. Clearly, the intended outcome of this method and the pill are identical, yet one is asserted to be morally approved and the other morally condemned. The prohibition is indefensible based on moral theology and throws the moral teaching of the church into confusion.

The harm of this conflict is most clearly seen in the prohibition of condoms in countries where AIDS has tragically become pandemic. Church authorities have interpreted the encyclical as indicating the only unallowable course for married couple where one of them is HIV-positive is complete sexual abstinence.

The Encyclical is not considered an "infallible" proclamation and at age 83 with eight grown children it does not involve any personal moral conflict for me. However, it has for Catholics all over the world for half a century and still does. Moral justification for this blanket ban was lacking fifty years ago and remains morally invalid today. Pope Francis should correct the issue and bring credibility back to the Church