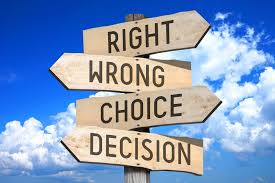 We have all had in our lifetime the experience of trying to talk someone out of making the same bad decisions they have made in the past that led them to pain and trouble. In spite of all of the logical good reasons we use, while saying they agree with us, they nevertheless have continued to make the same bad decisions again. In fact, if we are honest with ourselves, we do the very same thing. We repeat conduct which has proven to be a mistake even though we know and yet somehow expect a different answer this time.  The proverb “throwing good money after bad” has been quoted long before psychology gave this conduct a title, while explaining why it happens. Psychology commonly describes it as “escalation of commitment” or “the sunk cost fallacy” and “commitment bias.”

The phenomenon is well researched. It describes our tendency to continue to invest our energy, money or resources in an endeavor that is clearly not working. It explains how we continue to invest time, money, emotions and other resources into a failing project. While logic would clearly dictate, we should abandon it, instead we are looking for ways to justify continued commitment even when it’s clearly not in our best interest. There are a number of reasons for this. One of them is simply ego. We value the idea that we are right and that our previous behaviors were appropriate. That’s the reason people value their consistency in their decisions. People simply do not want to admit when you’re wrong. We mentally continue with bad choices simply because we don’t want to be wrong. Another reason is we develop an emotional attachment to our decisions or ideas. We emotionally have difficulty recognizing that hanging on is not in our best interests. Because of our ego we have difficulty accepting defeat. We don’t want to give up. Rather than accept we made a bad decision or that something we are doing isn’t working, we keep at it avoid having to admit failure. This kind of thinking can explain why we stay at a job we should stay at or stay in a relationship which is not good for us. It is also the reason that we make bad financial choices. it is also a primary reason why people remain committed to a political idea or leader while rejecting the clear evidence it was a poor choice. Instead of re-examining the wisdom of our choice, we dig in our heels even more and shut our minds to the reality of a bad choice.

The escalation of commitment is an easy trap to fall into because we want to prove that we were right. We don’t want to admit defeat. The truth is that the more you invest in something, whether physical, financial or emotional, the harder it becomes to abandon it and admit defeat. In psychologist Daniel Kathneman’s book, Thinking Fast and Slow, he discusses research that shows that the prospect of losing is a more powerful motivator on your behavior than the promise of gains. That means that whenever possible, we try to avoid losses of any kind. We do not compare losses to gains equally. The results of his experiments and many others have shown we have a strong loss aversion attitude. For example, in gambling, most people refuse to make a bet unless the possible payout is around double potential loss. In wagering a gamble we also continue to invest in a losing proposition because we don’t want to lose the money we have already gambled unsuccessfully  and want to win back our loses. We focus more on what we may lose than what we stand to gain. The “pain of losing” arises whenever we must give up anything we own as a loss. The amount doesn’t matter. We will feel the pain no matter what price we pay and that will influence our decision behaviors. While a robot would never make a decision which took to try to avoid a loss, we will make it anyway. As an emotional human it, often leads us into this sunk cost fallacy.

The  first step in escaping from the trap of this kind of illogical thinking is to realize it’s existence and influence on   our thinking. Start by asking yourself whether you would make the same decision today irrespective of what you have already decided? Learn the lesson from the mistake you have made in your original decision without feeling like you’re obligated to continue with it. Recognize that while you may not be able to recover what you already invested in what has already happened, choose not to invest any more in a bad decision. Apply the lyrics of Kenny Rogers song and “know when to hold them and when to fold them.”