My  sister Anita’s son, and my nephew, Peter Mayer was just named by the Washington State Parks Commission as the agency Director after a nation wide search. Peter’s history involved spending five years as chief operating officer of the Snohomish County health agency, which serves 772,000 residents with an annual budget of $16 million. Before that he devoted 16 years to running parks and recreation operations in Clark County, Mercer Island and Skagit County. He also is past president of the Washington Recreation and Park Association and was a founder of the nonprofit 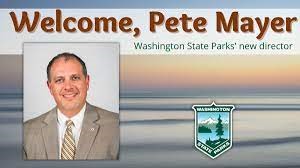 Intertwine Alliance, a trust supporting public parks in the Vancouver and Portland metropolitan area. He was serving as Deputy Executive Director of Metro Parks Tacoma, an independent park district, at the time of his appointment.  He holds a master’s degree in parks and recreation administration from Washington State University, where he also earned his undergraduate degree. Peter was born and raised in Anacortes.  He has been interested in parks since he was a child. His mother, Anita, reports that: “His first “job” with city parks was the summer after the sixth grade when getting home from strawberry picking, he would ride his bike to Storvik Park and volunteer to help the staff with the summer program.  They hired him that summer to open and close the restrooms each day. In junior high that led to a summer job on the staff maintaining the parks and cemetery. By college he was 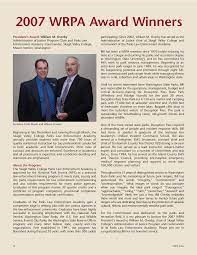 supervisor at Washington Park.  So bathroom duty, to a masters degree, to director of Washington State Parks.”

The family is very proud of Peter. Here is the news release of his appointment:

“Peter is a proven leader with a wide range of experience in parks and recreation,” said Parks Commission Chairman, Mike Latimer. “His background and expertise will help lead State Parks toward a bright future.”

As director, Mayer will be responsible for leading one of the country’s most beautiful and diverse park systems encompassing more than 120,000 acres with 124 developed parks, numerous properties and heritage sites, and a team of 1,000 dedicated staff.

Mayer’s first day with State Parks will be March 15.

“State parks has played an important role in the lives of many Washingtonians – especially over the past year,” said Commission Secretary Diana Perez. “Peter will honor and protect that legacy for the people of this state.”

Mayer currently serves as the Deputy Executive Director of Metro Parks Tacoma, where he is responsible for governance, strategic direction and overall business operations. During his time there, the organization received the prestigious National Recreation and Park Association’s Gold Medal award.

Mayer has also served on a number of boards and commissions, including the Washington State Recreation and Conservation Funding Board and the Vancouver USA Regional Sports Commission.

Mayer, 52, holds a master’s degree in parks and recreation administration from Washington State University, where he also earned his undergraduate degree. He completed the Cascade Public Executive Program through the University of Washington’s Daniel J. Evans School of Public Affairs.

Mayer, a native of Anacortes, and his wife Jen have two children — Zack, age 18, and Isabel, age 14. The Mayer family lives in Issaquah.