A minority of American Catholic bishops would deny church communion to president Joe Biden for what they claim is his conflict of position with their interpretation of Church teachings on policies regarding sexuality and abortion. These bishops would deny communion to president Biden and any other politician with views in conflict with  theirs. Why? Well, because they say to receive Communion, which is a central part of the Mass service, Catholics cannot “be conscious of grave sin as it would cause scandal.” Who are these bishops? The leading critic is bishop Carlo Vigano, a believer in QAnon, who has been calling on Pope Francis to resign and four other bishops who also support the pope’s resignation. They insist Biden should be denied communion for his pro choice political position. This is the same group who openly embraced Donald 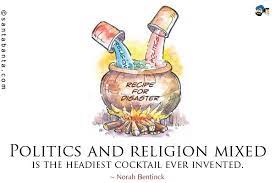 Trump for his public views about abortion and loading the courts to reverse existing laws and make abortion unlawful.

They ignore the Pope and  explicit Vatican directives sent to them to not take this action or make it a central issue. In spite of that the are continuing to act in direct conflict with the directives they have received. What has Pope Francis said about this issue and receiving communion? He has clearly said:

What do you think?  What do you think is the constitutional role of a person who is elected to a governmental law making body? Is it to represent the general interests and welfare of the people who elected them or are they bound by their religious beliefs irrespective of majority  voter interests? Do you think under our constitutional form of government the obligation of publicly elected legislators is limited by their personal religious beliefs? Or are there separate and essentially different obligations involved – those owed to one’s personal life moral code and those owed to the public as an elected representative of all the people who elected the politician?

What about judges? Do you think judges decisions in cases they decide are subject to  and controlled by  their personal opinions and their their religious beliefs? Or is their obligation to enforce the constitution and law whether they personally agree or not?  The central issue is whether elected legislators and judges must, while acting in their official capacity, follow the teachings of their personal religion affiliation to avoid sanction by the religious affiliation?

If you think judges and politicians are morally obligated to only decide or act in their official capacity in full compliance with their religious organizations beliefs, what are the consequences? Should  Catholic’s who believe they have such a moral obligation, simply be disqualified from running for office since their every decision is bound by official church teachings? If they decide to run for office, should they be required to publicly disclose they will only vote in compliance with Catholic teachings, at least the interpretation by these particular American Bishops? If  a candidate believes it is their obligation or a judge who believes it, aren’t they obligated to make that publicly clear  in advance?

What actually is the obligation of a person in political office? The U.S. Constitution outlines the role of Congress. It doesn’t authorize publicly elected politicians or judges to substitute their personal religious views, in conflict with the constitution or law or in conflict with the interests of the majority of voters who elected them while carrying out their official action or decisions. It says their role  is:

“To make all Laws which shall be necessary and proper for carrying into Execution the foregoing Powers, and all other Powers vested by this Constitution in the Government of the United States, or in any Department or Officer thereof.”

Isn’t a total violation of our constitutional form of democracy to have these bishops so actively involved in American politics. The first Amendment of the U.S. Constitution says: “Congress shall make no law respecting an establishment of religion, or prohibiting the free exercise thereof;”  This dangerous mix of politics and religion should be frightening to all citizens of this country.