My paternal grandfather, Nicola Luvera, was born in Valanidi, Calabria Italy November 23, 1860 and died in Anacortes, Washington on July 4, 1956. His father, Paolo Nicola and mother Rosa Luvera were sheepherders and sharecroppers in Gallina Italy. Grandfather worked with his father until he was 16 years old when he moved to Reggio Calabria where a cousin Antonio working in a slaughterhouse. He was able to get a job with his cousin and lived with their  family for four years. Then he married a young woman, Caterina, who  was from his village. They had a girl Rosina and a boy Salvatore. After a few years of marriage his wife, Caterina, died. His cousin and his wife took temporary charge of the children helping grandfather. After some time, arrangements were made for him to meet a young woman they knew, Philippa Latella. After a short courtship they were married and the young bride became a stepmother to his children. When they married my 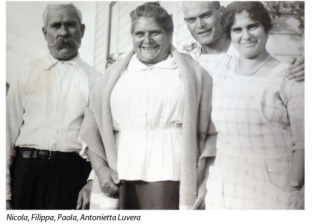 grandfather was 34 years old with a six-year-old daughter and a four year old son and she was a 24-year-old bride.  After their marriage they had a boy Consoletto born in 1896 and my father, Paul Luvera born in 1898. She later gave birth to twin boys who died in infancy and then twin girls, Antoietta, who was called Janet, & a girl, Caterina who died at age seven.

The pay at the slaughterhouse was $.22 cents per day. He worked there until In 1902 a cousin of his wife returned from Canada where he had been working and told him about the amount of money that could be earned in Canada. Grandfather wanted to travel there to earn money for the family and his cousins agreed to loan him the cost to travel to Canada, which was $60. The ship landed in Montréal, Canada. Through his cousins he got employment with the Canadian Pacific Railroad Company. He was given a pick and shovel to work installing railroad tracks and maintaining the railroad lines. He was soon able to send $20 in Canadian money to his wife and family.

In 1905, after working three years for the railroad, he had enough money to return home. There was a lot of celebrating on his return. My father 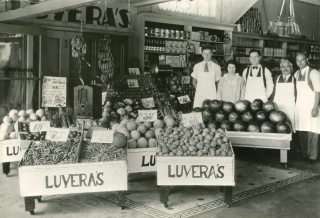 remembers his father waiting until nightfall, pulling the curtains and gathering the family around the kitchen table. He loosened his trousers, unloaded a money belt, pouring many gold coins on the table. Dad said they had never seen so many gold coins. After visiting for some time, it was decided that Salvatore would return with my grandfather to Canada and earn enough money to send for the rest of the family to move to Canada. The two of them, along with the cousins, returned to Canada. By 1910 my grandfather wrote to say that he had saved enough money to pay for the family to take a ship there. He arranged for the tickets and my grandmother and the children sailed on a German ship leaving Le Havre, France mid-February 1911. To get on the ship they had to take a long train ride to France where they had to sleep in the steamship company building on benches for two days until the ship left. The only language they spoke was Italian.

After a voyage in steerage they landed in Montréal, Canada and took a train to Blairmore Canada to meet my grandfather. They made the trip not speaking any English. Grandfather had a place to stay and was working in the coal mines. When dad was 15 years old he went to work in the coal mines too. After a time grandfather later developed lung problems from the work in the coal mines. His son Salvatore had earlier left for the U.S. and had ended up in Skagit County. He wrote recommending the family move to Anacortes because the fresh air was healthy plus available work. Anacortes had lumber mills and fish canneries that offered employment. Dad remembers Anacortes as having four sawmills, six shingle mills, six salmon canneries and two cod fish canneries when they arrived.  My grandfather got a job with the Great Northern Railroad company working with 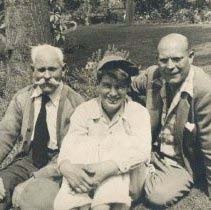 the other section hands installing and maintaining track. Dad found work in a sawmill. Neither grandparent spoke more than a little English, but dad had taught himself English while they were in Canada. Salvatore had written he was an officer in the “army” and grandfather was very proud to know that since he had served in the Italian army for a short time. It was until they arrived that they discovered Salvatore had meant the Salvation Army.

After several years of working Dad was able to borrow money to open a small family grocery store in Anacortes at 7th and Commerical. “Luvera’s Market” offered home delivery and credit. Nonno quit his job to be in charge of the vegetable and fruit displays on large stands right at the front of the store. The walls would open to the the outdoor sidewalk in good weather and grandfather’s displays were a work of art. If you have seen the fruits and vegetable displays at a county fair, you know what his fruit and vegetable stand looked like. Grandfather was very proud of of his work. For many years he worked at the store every day with dad. As long as I could remember he smoked Lucky Strike cigarettes. They were unfiltered and he smoked them until the burning end got very close to his mustache yet he lived past his nineties. He kept his carton of cigarettes in the back of the store. When I was a youngster of about twelve I stole packages of cigarettes from his carton. I stole enough that even grandfather told dad he was concerned he was starting to smoke too much. While smoking the stolen cigarettes concealed under the next door neighbor’s porch I managed start a small fire which with a lot of smoke. The fire department was called. I was caught and my mother was very unhappy with me. But grandfather told dad he was relieved to find out I had been taking his cigarettes because he had been worried that he was smoking too much since the carton was more empty then usual.

He and my grandmother lived in a small house with a large garden and rabbits. She was an excellent cook and I have vivid memories of going there with our family on weekends to spend time with them. He was a short, small man with a large mustache. In his later years, after she died, his circulation was enough of a problem that he lived with us so mom could take care of him which she did with loving care for a considerable time. He was a sweet, gentle man who had worked hard his entire life. He and dad were very close as father and son and his death was hard on Dad even though his father had lived a very long life.