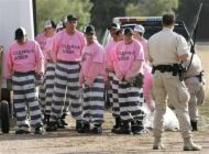 stay home New Year’s Eve. This state has one of the most severe laws in the nation regarding driving while drinking.

In June the state passed a new law that requires ignition-interlock devices for first time offenders, increased fines and a minimum of 45 days in jail for DUI convictions where the blood alcohol is .20 or higher. (See chart to calculate the reading from drinking) In fact, a reading above .080 means a ninety day jail sentence and ten days is mandatory. In addition, alcohol treatment is required and your driver’s license is suspended one year. Plus, you are on probation for up to five years and an ignition interlock device must be installed on your vehicle. On top of that, under Arizona law "sobriety check points" are allowed where cars are stopped for testing drivers.

In addition, in the county where we have a home, there is infamous Sheriff Joe Arpaio who has set up a "tent city" jail across the street from some nightclubs to house the arrested. The convicted are dressed in bright pink tee shirts with the phrase "Sheriff DUI chain gang." Serving a sentence in a tent, outside in this desert daytime heat and night time cold is not something I would want to endure.

While we have no plans for any serious drinking, I would rather avoid the whole experience even if not convicted of actual DUI. So, this year we will be watching the ball drop on television. But, only if we are awake that is. Happy New Year and safe driving.