In December of 1914, Reginald Hobbs, a 24 year old British soldier, wrote a five page mud spattered letter in pencil to his wife on a frosty moon lit night. It was December 24th 1914 and on this Christmas eve he was in a waterlogged trench on 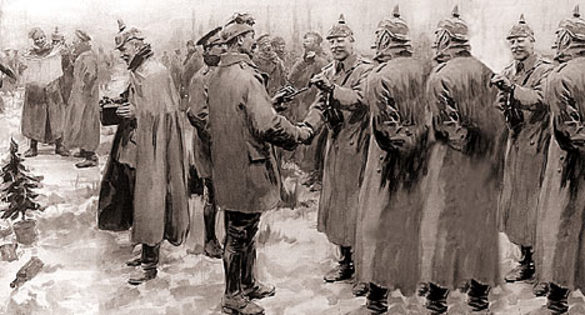 the Western Front in the region of Ypres, Belgium. Fifty yards away was the German trench. In his famous letter he told her that the guns had fallen silent along the Western front on this Christmas eve and the Germans had placed "lights all along the edge of their trenches" on this frosty moon lit night. The German soldiers placed candles on trees and began singing Christmas carols including Stille Nacht (Silent Night). Some held up signs "No Shoot!" Christmas carols were exchanged back and forth. The British regiment starting with The First Noel and the Germans answering with O Tannenbaum. The letter went on to describe an amazing night during this very bloody war. In fact, the occasion has become known as the "Christmas truce" of World War I.

The two sides began shouting Christmas greetings to each other. This was followed by calls to cross "no man’s land" between the two trenches to celebrate Christmas together. A few brave soldiers hesitatingly did just that 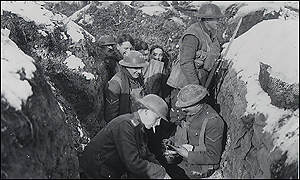 and crossed to the German side, followed by more soldiers. Hobbs, however, remained in the trench writing this letter because, as he explained to his wife in the letter, he thought it was German trick. Small gifts were exchanged of such things as whisky, jam, cigars and chocolate. The two sides decided to continue the truce while they collected their dead for burial. At burial held in no man’s land soldiers from both sides read from the 23rd Psalm. The Germans came to the American side and mingled with the soldiers there.

The truce spread down the lines and a soccer match was even held between the two sides. Although the Germans and British were the main participants, the French and Belgians took part as well. As one British soldier wrote home "Just you think, that while you were eating your turkey, etc, I was out talking and shaking hands with the very men I had been trying to kill a few hours before! It was astounding."

The silence of the truce continued all Christmas day an even to New Year’s. While there were some joint prayer sessions by chaplains and some gestures of civility at later Christmas times during this horrible war, nothing on the same scale as the 1914 Christmas truce ever happened again on the Western Front.