Twenty one year old Henry Cejudo, called by the press "Whiz Kid," won a gold medal in Olympic free style 55 kilogram (121 pounds) wrestling yesterday. What’s unusual about this athlete is not only his unique wrestling style and skill, but his family background. According to the Associated Press,(http://www.nbcolympics.com/wrestling/news/newsid=233761.html?_source=rss&cid=) his parents were undocumented Mexicans. There were six children to feed, four with his father who was in and out of prison until dying at age 44 last year. In fact, Henry never saw his father after age four. His mother, Nelly Rico, was the one who supported and cared for the family while keeping them out of trouble. They were very poor and his mother worked several jobs to keep them going. They never lived 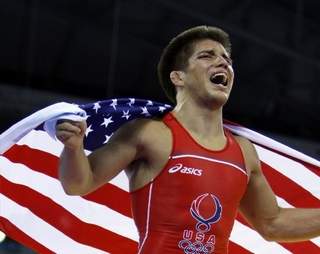 in one place very long. They lived with relatives and moved from apartment to apartment because they couldn’t keep up with the rent. They lived in bad neighborhoods, but the mother kept as close a watch over them as she could.

Henry and his older brother Angel admired the professional wrestlers and boxers they saw on TV. In Phoenix they participated in a youth wrestling program. Both boys became state high school wrestling champions. When the older brother was invited to the Olympic training center Henry went along and ended up living there. He was quickly recognized as a highly talented athlete. Unlike most Olympic wrestlers who go through four years of college and are experienced, Henry didn’t go to college. He didn’t have the experience of participating in tournaments and yet qualified for the Olympics. Wrestling against older and more experienced wrestlers in the Olympics, he continued to win with an unorthodox style that often frustrated his opponents.

He’s a whiz kid because he is the youngest American to win an Olympic gold medal. Cejudo entered the Olympic program at age seventeen and is the only wrestler to win a national senior championship before leaving high school. He only participated in one world championship before the Olympics competition. He is unique among the Olympic wrestlers in his experience and age. Cejudo's achievement is an amazing story of victory against all odds.

Cejudo was so emotionally keyed up that he began crying when the match was over that earned him the gold medal and he wrapped himself in an American flag. However, he was all smiles when the medal was awarded.

"I’m proud of my Mexican heritage, but I’m an American. It’s the best country in the world. They call it the land of opportunity and it is. Maybe if some other kid watches this, he can do the same."

While his mother wasn’t there to see him win several of his brothers and a sister were present. Cejudo He said he planned to sleep with the medal because he wasn’t letting go of it.

I am inspired by stories like this. Triumph over odds. Congratulations to Henry Cejudo.