I’ve just started a book In Harm’s Way a book about the sinking of the USS Indianapolis written by Doug Stanton. The book was made into a movie by the same title. It was directed by Otto Preminger and starred John Wayne, Kirk Douglas and Patricia Neal. The book discusses Kamikaze attacks. For an excellent summary of the history of Kamikaze pilots see Wikipedia http://en.wikipedia.org/wiki/Kamikaze

The term "kamikaze" can be translated "God wind," "God speed," "light wind," or "Divine wind," but the common translation is "Divine wind." These suicide attacks were by pilots in the Japanese military who flew planes loaded with explosives, fuel tanks and bombs. Their mission was to crash the plane into Allied ships and, of course, die in the effort. The Japanese began this program towards the end of the war in 1944 when they were unable to produce airplanes and pilots to keep up with U.S. aviation efforts.

Japanese military leaders found it easy to recruit volunteers. In fact there were twice as many volunteers as they had airplanes. They were 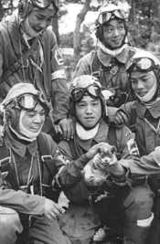 dedicated young men who were willing to die for the glory of it. This is a passage from a Kamikaze pilot’s manual:

"When you eliminate all thoughts about life and death, you will be able to totally disregard your earthly life. This will also enable you to concentrate your attention on eradicating the enemy with unwavering determination, meanwhile reinforcing your excellence in flight skills."

The training, however, was brutal. Pilots were struck and beaten for making mistakes in order to instill a "soldier’s fighting spirit." There was a ceremony before the pilots left. They were given a flag of Japan with spiritual writings on it. They drank sake and put on a head band with the rising sun. They were given a "belt of a thousand stitches" which were made by a thousand women who put in one stitch each. They also composed and read a death poem before departing. They often dropped flowers as they left on their final mission.

Pilots were told to turn back if they could not locate the target, but it’s reported that one pilot was shot after he returned for the ninth time. They were instructed where to hit the vessel and to never close their eyes as they might get off course. In the final moments before the crash they were to yell "Hissatsu" which roughly means "sink without fail."

In general, the poorly trained Japanese pilots were frequently shot

down by the anti aircraft guns on the ships without doing damage. But, they successful did hit ships. 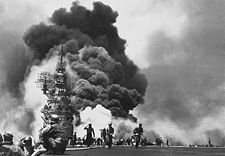 This is a photograph of Ensign Kioyoshi Ogawa who flew his plane into the aircraft carrier USS Bunker Hill on May 11, 1945. The Bunker Hill lost 372 men as a result of the explosion and damage caused by the impact.

In the battle of Okinawa in 1945 the Japanese sent waves of Kamikaze planes. Hundreds of planes were involved in what the Japanese called Operation Kikusui ("floating chrysanthemums")They were successful in damaging or sinking some thirty U.S. warships. However, over all there was a great waste of young Japanese men without doing much to stop the allied forces.