In January, the Seattle times published an opinion piece by Terrence Carroll and Sam Sperry titled "Church leaders should be careful influencing political campaigns" Http://seattletimes.nwsource.com/html/opinion/2008601098_opin08sperry.html They were critical of Catholic church leaders attempting to influence voting on legislative issues as well as for political candidates, as religious tax exempt organization. Seattle Archbishop Alex Brunett was interviewed on a 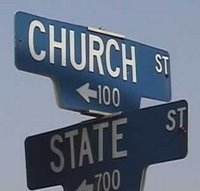 local Catholic radio station about the piece. He was upset and critical of their views as well as them personally. He insisted his archdiocese and U.S. Catholic bishops had not advocated political candidates or legislative issues. The evidence to the contrary is overwhelming and indisputable.

The record of American bishop's extensive lobbying regarding legislative issues as well as advocating voting on political candidates is well known and open. This has been true historically, but in particular starting with the first Bush campaign when the bishops joined with conservative Protestant organizations in promoting George Bush over his opponents because of Bush’s stance on abortion and gay marriage. During the Kerry campaign their efforts were blatant and aggressive in their opposition to Kerry and support of Bush. Pronouncements that it was a mortal sin to vote for a candidate who supported women’s rights regarding abortion or gay rights were made and polictical literature distributed in church’s during that campaign. Again, during the last presidential campaign they were involved once again over abortion. Recently, In Washington where the vote involved the right to end one’s life, the local Catholic paper took strong stands against it and sermons were given, opposing it and oppposition literature was distributed in Catholic church’s. The most recent political lobbying by Catholic church bishops and pastors involves pre-emptive opposition to H.R. 1964, the Freedom of Choice Act, dealing with abortion. Literature is being distributed in the Catholic church's, opposition published in the Catholic media and sermons given in the church's opposing the bill.

The political involvement by Catholic bishops is not hidden. For example, in November of 2008 the nation’s Catholic bishops, meeting in Baltimore,  vowed to oppose the Obama adminstration over it’s position on abortion rights. Archbishop Joseph Naumann of the Diocese of Kansas City in Kansas said politicians "can't check your principles at the door of the legislature." Naumann has said repeatedly that Kansas Gov. Kathleen Sebelius, a Catholic Democrat who supports abortion rights, should stop taking Holy Communion until she changes her stance. He insists:

"They cannot call themselves Catholic when they violate such a core belief as the dignity of the unborn."

It is obvious that any claim that the Catholic bishops have not and are not  involved in open political activity, including advocacy to influence legislation as well as advocting voting on political candidates, is disingenuous at best and more accurately described as just plain false. They have done so publically, flagrantly and repeatedly.

The issue of sepration of church and state is an important one and is highly relevant to the conduct of the bishops, but is not the topic I am focusing on. It is also important to keep in mind the topic is not whether the bishops are morally correct. The only question is whether they are violating the law in doing so. Given the fact that the bishops and conservative republicans demand that people follow the law whether they like the law or not, their conduct is subject to scrutiny. Are they being hypocritical about obeying the law? Should they be sanctioned by removal of their tax exempt status when they violate the law? That’s the issue.

A good discussion of the issue of tax exemption and political advocacy by charitable organizations will be found in the Boston College Law Review of July 2001. http://www.bc.edu/bc_org/avp/law/lwsch/journals/bclawr/42_4/42_4_TOC.htm In one of the articles, Professor Steffen N. Johnson outlines the law, Section 501 (c)(3) of the Internal Revenue Code. He says that if an charitable organization meets the criteria it will be given tax exempt status which means that it’s own income is tax exempt as well as contributions to it are tax deductible. However, he says, the law also imposes two restrictions on any political activity. First: "no substantial part" of their activities may constitute "carrying on propaganda" or otherwise attempting to "influence legislation." Second, the organization must not "participate in, or intervene in" (including publishing or distributing statements), any political campaign on behalf of or in opposition to any candidate for public office. The lobbying restriction was passed in 1934 and the campaigning restriction in 1954.

Steffen points out the restriction on efforts "to persuade voters of the correctness of moral convictions that relate to candidates for public office" is absolute. Activities of this kind are completely barred. As Steffen says about this:

"Taken at face value, organizations that wish to enjoy the benefit of tax exempt status may not say a word "on behalf of" or "in opposition" to a political candidate. The statute adopts a "zero tolerance" policy…"

Among Catholics as well as the general public, there is an increasing view that action should be taken for the violation of law by the American bishops: http://catholicknight.blogspot.com/2008/10/revoke-tax-exemption-for-catholic.html  It would seem apparent that the Catholic bishops should not be allowed to enjoy the benefits of a tax exempt status and at the same time break that law by trying to dictate the actions of American voters in the voting booth. It seems to me that if they insist on exercising what they claim is their right to give  "moral guidance" and what everyone knows is good old fashion politics, in violation  the law, they should pay the consequences. If they don’t believe they have to follow the laws of this country, whether they like them or not, then they should suffer the sanction of a law breaker and have their tax exemption taken away. Whether they are morally right in their political positions or not, they shouldn't be allowed to have it both ways and be tolerated as law violators merely because they are bishops. There should be an investigation by tax authorities into the activities of the American bishops to determine if they are breaking the law by their aggressive political activity and if they are, to sanction them for doing it.